An Essay Collection on Blackstone and His Critics

Just out from Hart is Blackstone and His Critics, edited by Anthony Page, University of Tasmania, and Wilfrid Prest, emeritus, University of Adelaide: 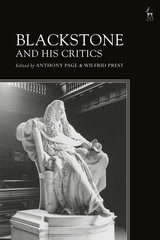 William Blackstone's Commentaries on the Laws of England (1765-69) is perhaps the most elegant and influential legal text in the history of the common law. By one estimate, Blackstone has been cited well over 10,000 times in American judicial opinions alone. Prominent in recent reassessment of Blackstone and his works, Wilfrid Prest also convened the Adelaide symposia which have now generated two collections of essays: Blackstone and his Commentaries: Biography, Law, History (2009), and Re-Interpreting Blackstone's Commentaries: A Seminal Text in National and International Contexts (2014).

This third collection focuses on Blackstone's critics and detractors. Leading scholars examine the initial reception of the Commentaries in the context of debates over law, religion and politics in eighteenth-century Britain and Ireland. Having shown Blackstone's volumes to be a contested work of the Enlightenment, the remaining chapters assess critical responses to Blackstone on family law, the status of women and legal education in Britain and America. While Blackstone and his Commentaries have been widely lauded and memorialised in marble, this volume highlights the extent to which they have also attracted censure, controversy and disparagement.

To get a 20% discount, order here and use the code CV7 at the checkout.

TOC after the jump.
1. Rationalising the Common Law: Blackstone and His Predecessors
Michael Lobban
2. The 'Least Repulsive' Work on a 'Repulsive Subject': Jeremy Bentham on William Blackstone's Commentaries on the Laws of England
Philip Schofield
3. Blackstone, Expositor and Censor of Law Both Made and Found
Jessie Allen
4. William Blackstone, Edward Gibbon and Thomas Winchester: The Case for an Oxford Enlightenment
Ian Doolittle
5. Rational Dissent and Blackstone's Commentaries
Anthony Page
6. Blackstone, Parliamentary Sovereignty and his Irish Critics
Ultán Gillen
7. Blackstone, Family Law and the Exclusion of the Half Blood in Inheritance
Tim Stretton
8. Blackstone and Women
Carolyn Steedman
9. Professing Law in the Shadow of the Commentaries
David Lieberman
10. Hammond's Blackstone and the Historical School of American Jurisprudence
David M Rabban
11. 'A Very Narrowing Effect Upon Our Profession': A Progressive Jurist Confronts Blackstone
John V Orth
12. Blackstone's Posthumous Reputation
Wilfrid Prest
Posted by Dan Ernst at 11:00 AM