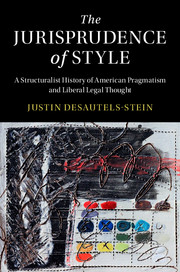 In the contemporary domain of American legal thought there is a dominant way in which lawyers and judges craft their argumentative practice. More colloquially, this is a dominant conception of what it means to "think like a lawyer."  Despite the widespread popularity of this conception, it is rarely described in detail or given a name. Justin Desautels-Stein tells the story of how and why this happened, and why it matters. Drawing upon and updating the work of Harvard Law School's first generation of critical legal studies, Desautels-Stein develops what he calls a jurisprudence of style. In doing so, he uncovers the intellectual alliance, first emerging at the end of the nineteenth century and maturing in the last third of the twentieth century, between American pragmatism and liberal legal thought. Applying the tools of legal structuralism and phenomenology to real-world cases in areas of contemporary legal debate, this book develops a practice-oriented understanding of legal thought.


"In this wide-ranging and masterful work, Justin Desautels-Stein explores, dissects, and critiques what it means to think like a lawyer in today’s hegemonic context of liberal legal thought. Drawing on art history and musicology, ranging from the anthropologist Philippe Descola to the philosopher Hubert Dreyfus, from Roland Barthes to Michel Foucault, Desautels-Stein creatively reinvigorates the Harvard School of legal structuralism to expose the deep historical, structural, and conceptual illusions of contemporary pragmatic legal liberal thought."  Bernard E. Harcourt, Columbia Law School

TOC after the jump.
Overture