McSheffrey on Sanctuary in England 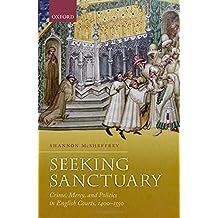 Seeking Sanctuary explores a curious aspect of premodern English law: the right of felons to shelter in a church or ecclesiastical precinct, remaining safe from arrest and trial in the king's courts. This is the first volume in more than a century to examine sanctuary in England in the fifteenth and sixteenth centuries. Looking anew at this subject challenges the prevailing assumptions in the scholarship that this 'medieval' practice had become outmoded and little-used by the fifteenth and sixteenth centuries. Although for decades after 1400 sanctuary-seeking was indeed fairly rare, the evidence in the legal records shows the numbers of felons seeing refuge in churches began to climb again in the late fifteenth century and reached its peak in the period between 1525 and 1535. Sanctuary was not so much a medieval practice accidentally surviving into the early modern era, as it was an organism that had continued to evolve and adapt to new environments and indeed flourished in its adapted state. Sanctuary suited the early Tudor regime: it intersected with rapidly developing ideas about jurisdiction and provided a means of mitigating the harsh capital penalties of the English law of felony that was useful not only to felons but also to the crown and the political elite. Sanctuary's resurgence after 1480 means we need to rethink how sanctuary worked, and to reconsider more broadly the intersections of culture, law, politics, and religion in the years between 1400 and 1550.


1. INTRODUCTION: RICHARD SOUTHWELL FLEES TO SANCTUARY
Seeking Sanctuary in Late Medieval and Tudor England
Explaining the Tudor Resurgence of Sanctuary
Sanctuary and the Partiality of the Archives

2. TAVERN BRAWLS, CIVIL WARS, AND REMEDIES FOR TYRANNY: THE EVOLUTION OF SANCTUARY IN ENGLAND, C. 1380-1500
Herman Stokfyssh and his Flight to Westminster: The Development of Chartered Sanctuary c. 1400
Sanctuary-Seeking 1400-1550: The Numbers
Sanctuary and the Wars of the Roses
Sanctuary, Mercy, and Redemption
Ecclesiastical Liberties as a Weapon Against Tyranny: St. Edmund and Sheriff Leoffstan

3. DEAN CAUDRAY AND THE CITY OF LONDON: THE POLITICS OF SANCTUARY IN THE FIFTEENTH CENTURY
The Escape of John Knight
St. Martin le Grand and the City of London: Liberties, Franchises, and Jurisdictions
Dean Caudray and the Events of September 1440
Marshalling Cases
The End of Dean Caudray's Days

5. FRANCIS WOODLEKE'S WINDOW: STRANGER SHOEMAKERS, BOUNDARIES, AND SANCTUARY IN LONDON IN THE 1530S
Living in the Precinct of St. Martin Le Grand
Governing St. Martin's Precinct in the Reign of Henry VIII
Stranger Artisans, Sanctuary Men, and the City
The Boundaries of St. Martin's
The Dissolution of St. Martin le Grand and Beyond

6. THE SANCTUARY TOWN OF KNOWLE: CRIME, LOCAL AUTHORITIES, AND THE STATE IN 1530S ENGLAND
The Goat Inn Robber and Sanctuary at Knowle
Robbery, Flight, Sanctuary
Sanctuary at Knowle and the Administration of Law and Justice in the 1530s
The Knowle Sanctuary and Tudor State Formation

8. CONCLUSIONS: SANCTUARY, LAW, AND POLITICS
The Statute of 1540 and Sanctuary's Precipitous Decline