James R. Maxeiner, University of Baltimore, has posted Failures of American Methods of Lawmaking in Historical and Comparative Perspectives, with the Cambridge University Press: 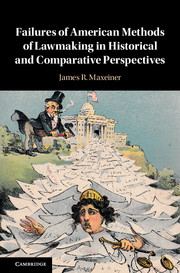 In this book, James R. Maxeiner takes on the challenge of demonstrating that historically American law makers did consider a statutory methodology as part of formulating laws. In the nineteenth century, when the people wanted laws they could understand, lawyers inflicted judge-made, statute-destroying, common law on them. Maxeiner offers the cure for common law, in the form of sensible statute law. Building on this historical evidence, Maxeiner shows how rule-making in civil law jurisdictions in other countries makes for a far more equitable legal system. Sensible statute laws fit together: one statute governs, as opposed to several laws that even lawyers have trouble disentangling. In a statute law system, lawmakers make laws for the common good in sensible procedures, and judges apply sensible laws and do not make them. This book shows how such a system works in Germany and would be a solution for the American legal system as well.

In an abstract, posted with the book’s front matter on SSRN, Professor Maxeiner elaborates:


America’s eighteenth-century founders expected that the people of the United States would establish a wise and happy government of written laws adopted with a single eye to reason and the good of those governed. Few Americans today would say that America’s lawmaking fulfills the founders’ expectations. Dysfunctional is the word that many Americans use to describe their methods of lawmaking. The legal professions tell the American people that they are doing the best the can. They tell a myth of common law. They say the people should rejoice, and not complain, when America’s judges make law, for such lawmaking makes America’s laws exceptional. It is how America has always made law, they say. Judges make better laws than legislatures, they claim.

The historical part of this book explodes the common law myth of dominance of judge-made law in American history. Using sources hardly accessible until 21st century digitization, it shows that statutes have had a much greater role in American law than the legal professions acknowledge.

The comparative part of this book dismantles the claim that judges make better law then legislatures. It shows how the methods of American legislative lawmaking, owing to neglect, have failed to keep up with their counterparts abroad, and have thus denied the people the government of laws that the founders expected.

Appendix: The Foreign Law Controversy and the Fate of Civil Law Scholarship in American Law Schools
Posted by Dan Ernst at 1:00 PM