Graber and Gilman's "Constitution of the Confederate States" 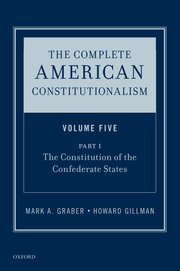 The latest volume in the series The Complete American Constitutionalism, by Mark A. Graber, University of Maryland Francis King Carey School of Law, and Howard Gillman, University of California, Irvine, is now out.  The series “is designed to be the comprehensive treatment and source for debates on the American constitutional experience. It provides the analysis, resources, and materials both domestic and foreign readers must understand with regards to the practice of constitutionalism in the United States."  The new volume (5, pt 1) is The Constitution of the Confederate States:

TOC after the jump
Preface: The Banality of Confederate Constitutional Evil

II. Foundations
A. Secession
B. Sources
1. The Federal Constitution and Amendments
2. State Constitutions and Amendments
3. Extra-Constitutional Sources of Authority
C. Principles
1. Jefferson Davis, Inaugural Addresses
2. Inaugural Address of the President of the Provisional Government
3. The Inaugural Address
4. Robert Barnwell Rhett, The Address of the People of South Carolina, Assembled in Convention, To the People of the Slaveholding States of the United States
5. Thomas S. Bocock, Speech on Becoming Speaker of the House
6. Alexander Stephens, Cornerstone Speech
D. Scope

V. Federalism
A. The Status of States in the Federal Union
B. State Regulation of Commerce
C. State Sovereign Immunity and Commandeering of State Officials
D. Preemption
E. Relationships Between States

VI. Separation of Powers
A. Presidential and Foreign Policy Powers
B. Domestic Powers of the President
C. Presidential Power to Execute the Law
D. Appointment and Removal Powers
E. Delegation and Administrative Agencies