David Kairys writes in the opening of his new memoir: 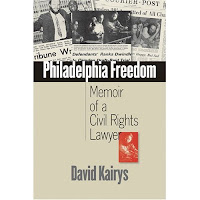 IT WAS AN OVERCAST EVENING in late February 1972, and mist rose above the Delaware River as I crossed the Ben Franklin Bridge, the ornate suspension bridge between downtown Philadelphia and Camden, New Jersey. As I slowed for the tollbooth on the Camden side, I could see the waterfront and the idle Campbell’s Soup factories. I had driven around for an hour looking in the mirrors to see if the FBI was following me, but I mostly noticed I was not as nervous as I should be.

a Freedom, Memoir of a Civil Rights Lawyer by David Kairys, Temple University, Beasley School of Law, has just been published by the University of Michigan Press. Kairys has posted the table of contents, introduction and chapter 1 on SSRN. Here's the abstract:

Philadelphia Freedom, Memoir of a Civil Rights Lawyer analyzes and critiques civil rights law, practice and history from the perspective of a civil rights lawyer. It takes the reader inside the lawyer's (David Kairys) head - it is a memoir - as he searches for arguments, theories, remedies and solutions first in 1968 as a novice public defender and later as a partner in a small civil rights firm. This excerpt is chapter 1 (along with the short introduction and the table of contents), "Georgia on My Mind," about a convicted murderer who escaped from a Georgia chain gang in 1945 and was discovered almost 25 years later gainfully employed in construction and living with a wife and four children in Philadelphia. After a series of sometimes wild theories and strategies and unpredictable events, the governor of Pennsylvania refused Georgia's extradition request, a first in Pennsylvania's history.

"David Kairys is one of the grand long-distance runners in the struggle for justice in America. His brilliant legal mind and superb lawyerly skills are legendary. This marvelous book is his gift to us!"-Cornel West, Princeton University, award-winning author of Race Matters

"With engaging, insider stories of innovative legal strategies of a truly creative lawyer, this book evokes the ebullient spirit of progressive social change launched in the 1960s and should be read by aspiring and practicing lawyers as well as anyone interested in American social history. Philadelphia Freedom reads like a suspense novel and reveals how novel legal and political thinking can and does make a real difference to individuals and to the quality of justice."-Martha L. Minow, Harvard Law School.
There is more on the press website. Decades of law students have grown up with Kairys' edited collection, The Politics Of Law: A Progressive Critique, now in its third edition and still in print.
Posted by Mary L. Dudziak at 7:45 AM