Paul A. Lombardo, Georgia State University College of Law, has posted the introduction and prologue to Three Generations, No Imbeciles: Eugenics, the Supreme Court, and Buck v. Bell (Johns Hopkins University Press, 2008). The abstract explains that the book 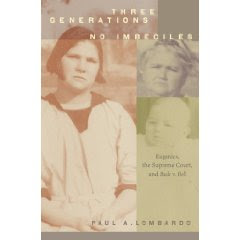 tells the story of the 1927 U. S. Supreme Court case Buck v. Bell, which approved laws allowing states to perform surgery in order to prevent "feebleminded and socially inadequate" people from having children. In the Buck case the Supreme Court endorsed involuntary sterilization as a tool of government eugenic policy, setting the stage for similar laws in the majority of states. The case is most often remembered by the Oliver Wendell Holmes Jr., opinion, which ended in the rhetorical climax: "Three generations of imbeciles are enough." Paul Lombardo sets out in this book to challenge the accuracy of the Holmes opinion, and recount in detail the events that brought Buck to the Supreme Court.

A reviewer in the New England Journal of Medicine has called the book "lucidly written, well researched, thorough, and provocative."
Image credit.
Posted by Dan Ernst at 2:43 PM