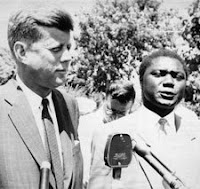 The fabulous teaching supplement includes a podcast of an interview with Meriwether, teaching exercises listed below, links to primary sources, and a bibliography of further readings.
Among the primary sources is an excerpt from the Brief for the United States as Amicus Curiae in Brown v. Board of Education, which argued that school segregation harmed U.S. foreign relations during the Cold War. I believe this is the first time this source has been available open-access on-line.
Overall, these sources make it quite easy to bring transnational history into teaching the history of civil rights during the Cold War and 20th century U.S. politics.
Exercise 1: Race and the Cold War
Exercise 2: The United States and Colonialism in Africa
Exercise 3: African Americans and Africa
Exercise 4: Hearts, Minds, and Student Exchanges
Exercise 5: Politics of Race
Posted by Mary L. Dudziak at 11:56 AM