Here is one in what will be a series of posts to recent articles that were spotted for Legal History Blog by Mr. Robert Richards. They all appear in journals in the Project Muse database and are accessible on-line to institutional or personal subscribes. 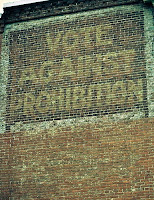 When explaining the success of the Prohibition movement in the United States between 1900 and 1920, scholars argue that prohibitionists were able both to tap into the distrust of many rural, native-born, evangelical Protestants toward modern urban life and to bring together disparate groups of reformers around one goal: the elimination of the saloon. Furthermore, localized campaigns resulting in the elimination of saloons from many rural areas kept this base of voters energized, ultimately leading to impressive dry turnouts in statewide Prohibition referenda. This study extends and amplifies these findings through an analysis of three sets of factors on voting outcomes: the percentage of various demographic groups (urban, immigrant, and ritualistic religious populations) residing in a county; the distance of each county to saloons; the presence or absence of producers of alcohol in a county. Results of ordinary least-squares regression demonstrate that access to saloons and the percentage of immigrant and ritualistic church members in a county are the variables that most influence the results of Prohibition referenda. Furthermore, unlike what previous research has demonstrated, these variables have their greatest influence by affecting wet turnout rates.