Property at the Folger Library

The Folger Library in Washington, D.C., announces a "late-spring" seminar, "Changing Conceptions of Property"," to be held at the Library and directed by Gordon Schochet, Professor of Political Science at Rutgers University, and J.G.A. Pocock, Emeritus Professor of History at the Johns Hopkins University. The seminar will meet Thursdays and Fridays, 1 - 4:30 p.m., 14 May through 12 June 2009. Applications are due on 5 January 2009. 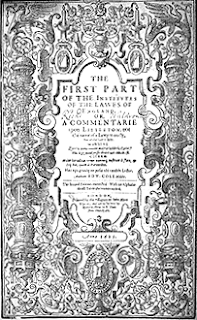 This seminar, sponsored by the Center for the History of British Political Thought, will examine the radically changing character of a fundamental concept in political and legal thought: property. Its shifting meanings in early modern Britain mirrored, and in many respects, drove, transformations of the emerging understanding of rights. Property originally indicated the right or title of a possessor to a thing possessed (with the possessor's entitlement to legal protection and political membership). During the seventeenth century, however, property came to designate the thing possessed. Participants will examine the conceptual history of property, from real property in land to personal property in goods, capital, or credit, which increasingly defined the individual as a political agent with the capacity to act in society. Primary readings will be drawn from the common law mind through Harrington and Locke to the Scottish Enlightenment and Adam Smith. Session topics may include: the role of property in commerce and political economy; the social and legal agency of women as derived through property; and the use of property as a justification for its expropriation from indigenous peoples. Research projects may address social conventions and practices influenced by changing discourses of property, cultural pressures under which those discourses changed, or varieties of discourse in which property figures. Invited faculty will contribute their perspectives.