Peretti, An Empirical Analysis of Bickel, The Least Dangerous Branch 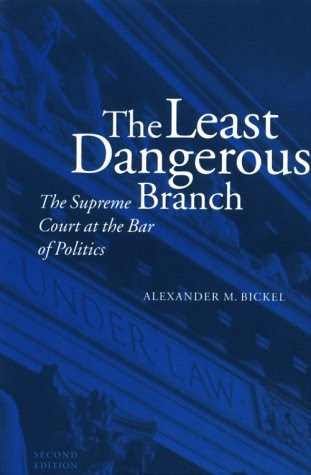 ay An Empirical Analysis of Alexander Bickel's the Least Dangerous Branch. It appeared in THE JUDICIARY AND AMERICAN DEMOCRACY: ALEXANDER BICKEL, THE COUNTERMAJORITARIAN DIFFICULTY, AND CONTEMPORARY CONSTITUTIONAL THEORY, Kenneth D. Ward, Cecilia R. Castillo, eds. (State of New York Press, 2005). Here's the abstract:
Alexander Bickel was quite uneasy about judicial review, particularly how it was used by the Warren Court, yet he desperately sought to identify its virtues and thereby defend it. This chapter argues that Bickel failed in his struggle to reconcile judicial review with democratic values and that the cause is empirical error in his key assumptions. Contained within Bickel's characterization of the countermajoritarian difficulty are several assertions which can be examined empirically. Bickel variously claims that: legislation reflects majority preferences; Supreme Court decisions are inconsistent with majority preferences; Supreme Court decisions are final and irreversible; and the Court is unique or "deviant" in its countermajoritarianism. Each assumption is faulty and consequently dooms from the start Bickel's efforts to reconcile judicial review with democratic values.
Posted by Mary L. Dudziak at 7:46 AM