Sugrue and McMillen at the Miller Center

Here are two webcasted events in January at the Miller Center for Public Affairs at the University of Virginia: 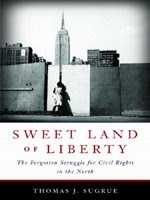 On Monday, January 12, at 11:00 AM, Thomas J. Sugrue, the Edmund J. and Louise W. Kahn Professor of History and Sociology at the University of Pennsylvania, will present (and sign copies of) his new book, Sweet Land of Liberty: The Forgotten Struggle for Civil Rights in the North (Random House, 2008). Sugrue is a specialist in twentieth-century American politics, urban history, civil rights, and race and is the author of The Origins of the Urban Crisis: Race and Inequality in Postwar Detroit (Princeton University Press, 1996), which won the Bancroft Prize in American History, the Philip Taft Prize in Labor History, and the President's Book Award of the Social Science History Association.

On Friday, January 23, at 12:30 PM, Christian McMillen, Department of History, University of Virginia, will present two papers: "The Historians' Brief in Carcieri v Kempthorne," an Indian law case from the Supreme Court's current term, and "Proof, Evidence and History in Indigenous Land Claims," a paper blending history with the law in the early years of Indian claims. McMillen is the author of Making Indian Law: The Hualapai Land Case and the Birth of Ethnohistory (Yale University Press, 2007), which has recently won book prizes from the American Society for Legal History and the William Nelson Cromwell Foundation.
Posted by Dan Ernst at 1:30 AM