Bartrum on The Constitutional Canon as Argumentative Metonymy

This article builds on Philip Bobbitt's Wittgensteinian insights into constitutional argument and law. I examine the way that we interact with canonical texts as we construct arguments in the forms that Bobbitt has described. I contend that these texts serve as metonyms for larger sets of associated principles and values, and that their invocation usually is not meant to point to the literal meaning of the text itself. This conception helps explain how a canonical text's meaning in constitutional argument can evolve over time, and hopefully offers the creative practitioner some insight into the kinds of arguments that might accomplish this change. I offer three examples, each organized by: (1) the argumentative modality within which each text most often appears; (2) the type of evolution the text's meaning has undergone; and (3) the predominant sphere of constitutional discourse in which evolution has take 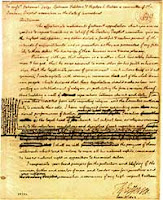 n place. The first example - Thomas Jefferson's Reply to the Danbury Baptists - appears in the historical modality, and is an example of 'decanonization' accomplished in the Supreme Court. The second, Lochner v. New York, appears in doctrinal argument and exemplifies 'canonical refinement' within the legal academy. The Declaration of Independence and the Gettysburg Address are my final examples; they appear in the ethical modality, and illustrate 'canonical reformation' within the sphere of constitutional politics. Along the way, I hope that my historical narratives shed perhaps a little light on old and familiar stories. I do not intend to forward much of a normative interpretive theory of my own here, beyond pointing to Wittgenstein's generalized assertion that meaning can best be found in use. Indeed, I believe this approach is in keeping with the central and illuminating Wittgensteinian insight that Bobbitt has brought to constitutional law. That is, there are no 'right' answers to many constitutional questions; there are no foundational kinds of definitions for the most controverted constitutional terms, which we might discover if only we could hit upon the correct interpretive theory or algorithm. All that we have is the constitutional conversation itself - this discussion and its derivative decisions are, in fact, the constitution - and the only meanings we can attach to disputed terms are those that we can discover by looking to their proper use. It is nonetheless true that such a descriptive project is also, by necessity, a historical project, complete with its own kinds of interpretive decisions and normative judgments. But my aim here is at a particular kind of history--an 'argumentative' history, for lack of a better phrase - which explores the appearance and construction of canonical texts within particular arguments, and tries generally to avoid taking a position on the merits of substantive claims. In the end, I conclude that constitutional argument - like art - is better described than explained.