Reviewed: Jacoby, Alger Hiss and the Battle for History 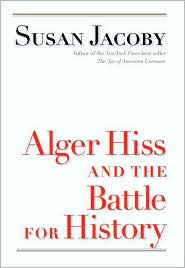 Alger Hiss and the Battle for History by Susan Jacoby is reviewed in the Washington Post. David Greenberg writes that the author

admirably upholds what is both the common-sense position and the scholarly consensus: that Hiss was almost certainly guilty of both perjury and espionage, but also that his guilt hardly justifies the McCarthyite spy-hunting that flowed from his conviction. Admittedly, her defense of this eminently reasonable position gives her book a curious raison d'être: a fierce need to argue the agreed-upon, a burning insistence that the fervor surrounding a 60-year-old controversy is so overblown that the subject demands . . . yet another intervention. She urges "both the right and the left to let go of the Cold War," even as she enthusiastically dons the hat of Cold War historian.

nberg finds it odd that Jacoby "has almost nothing but harsh words" for legal historian G. Edward White.

White's book "Alger Hiss's Looking-Glass Wars" (2004) remains the best study of Hiss's fluctuating reputation and his importance as a cultural symbol. (One might even wonder whether White's volume loomed during the writing of this newer treatise as Jacoby's anxiety-of-influence book: the already published work that every author fears might render his or her effort superfluous.) Jacoby shows intemperance, too, toward other temperate writers -- a strange turn in a book that aspires to calm a roiling debate with cool detachment.