There are many panels of interest to legal historians at the Law and Society Association annual meeting later this week in Denver. LSA is one of the best meetings for a book p 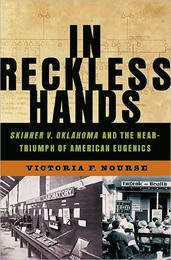 anel, and there are several interesting book panels at this year's meeting. Here are some of the panels on new legal history books or other books of interest:
Thu, May 28 - 2:30pm - 4:15pm
Author Meets Reader--Eloquence and Reason: Creating a First Amendment Culture, by Robert Tsai

Abstract:
Eloquence and Reason explores how the words in the Constitution become culturally salient ideas, inscribed in the habits and outlooks of ordinary Americans. Professor Robert Tsai employs the First Amendment as a case study to illustrate that liberty is achieved through the formation of a common language and a set of organizing beliefs. He explicates the structure of First Amendment language as a distinctive discourse and illustrates how activists, lawyers, and even presidents help to sustain our First Amendment belief system. When significant changes to constitutional law occur, they are better understood as the results of broader linguistic transformations. The book concludes by positing a model of judicial review in which jurists are responsible for the management of prevailing political discourses, quite apart from any obligations they may have to substantive conceptions of the good. These fascinating ideas will be explored by experts on the First Amendment, on constitutional culture, on law and society, and on legal discourse.

Abstract:
This book session addresses the history and historiography of a single United States Supreme Court case, best known among lawyers as a precursor to Roe v. Wade. The book tells the untold story of how a group of prisoners inside an Oklahoma prison during the Depression challenged eugenics in the case of Skinner v. Oklahoma, despite the fact that the Supreme Court had upheld its constitutionality in the infamous Buck v. Bell decision. The book not only addresses the actual, rather violent events, that led to the court's decision but also the key concepts that make the case incomprehensible today -- the court's invocation of equality, the idea of race and its role in eugenics, the transitional state of rights discourse in 1942, and the ways in which the criminology of the day propelled eugenics, as well as the New Deal constitutional revolution that led to the decision.

Abstract:
This book explores the birth of the African-American international tradition and, particularly, the roots of African Americans’ stake in international law. Richardson considers these origins as only formally arising about 1619, the date the first Africans were landed at Jamestown in the British North American colony of Virginia. He looks back to the opening of the European slave trade out of Africa and to the 1500s and the first arrival of Africans on the North American continent. Moving through the pre-Independence period, the American Revolution, the Constitutional Convention, and the Westward Migration, the book ends around 1820.

Abstract:
Unearthing the legal history of racial identity, Ariela J. Gross’s WHAT BLOOD WON’T TELL (Harvard University Press, 2008) examines the paradoxical and often circular relationship of race and the perceived capacity for citizenship in American society. It tells the history of race and racism in the U.S. through the lens of "trials of racial identity," from the early republic through the present, in cases involving people of European, African, and Indian ancestry, as well as immigrants from Asia and Mexico. The panel will include discussion from the perspectives of legal history, critical race theory, and American Studies.

Abstract:
In Exporting American Dreams, Mary Dudziak recounts with poignancy and power the untold story of Marshall's journey to Africa. African Americans were enslaved when the U.S. constitution was written. In Kenya, Marshall could become something that had not existed in his own country: a black man helping to found a nation. He became friends with Kenyan leaders Tom Mboya and Jomo Kenyatta, serving as advisor to the Kenyans, who needed to demonstrate to Great Britain and to the world that they would treat minority races (whites and Asians) fairly once Africans took power. He crafted a bill of rights, aiding constitutional negotiations that helped enable peaceful regime change, rather than violent resistance.

Fri, May 29 - 2:30pm - 4:15pm
Author-Meets-Reader--Lawyers of the Right: Professionalizing the Conservative Coalition, by Ann Southworth

Abstract:
The Middle Eastern question lies at the heart of the most pressing issues of our time: the war in Iraq and on terrorism, the growing tension between preservation of our national security and protection of our civil rights, and the debate over immigration, assimilation, and our national identity. Yet paradoxically, little attention is focused on our domestic Middle Eastern population and its place in American society. Unlike many other racial minorities in our country, Middle Eastern Americans have faced rising, rather than diminishing, degrees of discrimination over time; a fact highlighted by recent targeted immigration policies, racial profiling, a war on terrorism with a decided racialist bent, and growing rates of job discrimination and hate crime. Oddly enough, however, Middle Eastern Americans are not even considered a minority in official government data. Instead, they are deemed white by law. In Whitewashed, John Tehranian combines his own personal experiences as a Middle Eastern American with an experts analysis of current events, legal trends, and critical theory to analyze this bizarre Catch-22 of Middle Eastern racial classification. He explains how American constructions of Middle Eastern racial identity have changed over the last two centuries, paying particular attention to the shift in perceptions of the Middle Easterner

from friendly foreigner to enemy alien, a trend accelerated by the tragic events of September 11. Focusing on the contemporary immigration debate, the war on terrorism, media portrayals of Middle Easterners, and the processes of creating racial stereotypes, Tehranian argues that, despite its many successes, the modern civil rights movement has not done enough to protect the liberties of Middle Eastern Americans.

Sat, May 30 - 8:15am - 10:00am
Author Meets Reader--Stages of Capital: Law, Culture, and Market Governance in Late Colonial India, by Ritu Birla

Abstract:
Ritu Birla's book "Stages of Capital: Law, Culture and Market Governance in Late Colonial India" charts the legal institutionalization of 'the market' as an abstract object of governance and places commercial law at center of broader debates about colonial modernities, governmentality, and subject-formation. The argument traces the introduction of categories of public and private into colonial law relating to the economy, categories, Birla argues, that distinguish the realm of economy from that of culture. At the same time, Birla explores the ways in which the language of contract translates the "embedded" value-systems of indigenous kinship-based capitalists.

Abstract:
The South African Constitutional Court has issued internationally prominent decisions abolishing the death penalty, enforcing socio-economic rights, allowing gay marriage, and promoting equality. By contrast, the U.S. Supreme Court has generally ruled more conservatively on similar questions. This book examines the Constitutional Court in detail to determine how it has functioned during South Africa's transition and compares its ruling to those of the U.S. Supreme Court on similar rights issues. The book also analyzes the scholarly debate taking place in South Africa about the Constitutional Court. It furthermore addresses the arguments of those international scholars who have suggested that constitutional courts do not bring about social change. In the end, the book highlights a transformative pragmatic method of constitutional interpretation, a method the U.S. Supreme Court could employ. This Author meets Readers panel will consist of scholars who discuss, critique, and expand on the book's themes.