Waldref on the Reagan-Era NLRB

Although it's not on SSRN, I'm going to note the appearance of an article by a recent graduate of Georgetown Law, Vanessa Waldref, written for my seminar a few years back. I thought it provides another window on the Right's dissatisfaction with the Reagan administration, which was for me one of the most interesting facets of Laura Kalman's recent presentation at the Miller Center.

The article paper is "Reagan's National Labor Relations Board: An Incomplete Revolution," Georgetown Journal on Poverty Law and Policy 15 (2008): 285-313. Here is the abstract:

The drafters of the Taft-Hartley Act of 1947 sought to curb the power of the National Labor Relations Board, which they perceived as biased toward labor, by imposing an internal separation of powers. The Act separated the General Counsel’s administrative and prosecutorial power from the Board’s judicial authority. The Act’s supporters desired that the General Counsel would serve as a conservative counterweight to the liberal leanings of the sitting Board members under the Truman Administration. Forty years later, the unique bifurcated structure of the NLRB again became a topic of controversy, this time under the conservative watch of the Reagan Presidency. In 1980, conservative interest groups celebrated President Reagan’s resounding electoral victory, and called for the “Reagan Revolution” to implement a new conservative social policy. Organizations like National Right to Work demanded conservative labor policy reforms at the NLRB. 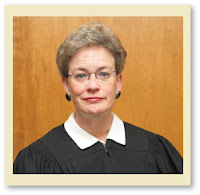 This paper argues that by the end of Reagan’s Presidency, the revolution at the NLRB was incomplete. The unique bifurcated structure of the Board prevented conservative interests from simultaneously capturing both the influential Board Chair and General Counsel positions. Reagan’s controversial general counsel appointee, Rosemary Collyer [pictured at left], maintained the separation of powers between the Board and Office of the General Counsel and declined to follow the demands of movement conservatives. Although unions suffered significant losses of labor law protections during the Reagan Presidency, Collyer’s independence, along with the Board’s structure, precluded a complete overhaul of labor relations law.

Image Credit
Posted by Dan Ernst at 1:07 AM