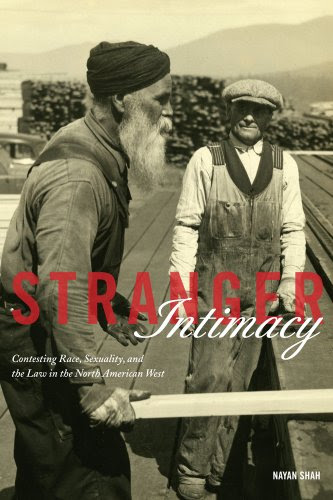 H-Borderlands has published a review of Nayan Shah, Stranger Intimacy: Contesting Race, Sexuality and the Law in the North American West (2011). The book is part of the University of California Press American Crossroads Series.

Here's a taste of the review, by Julia Camacho (University of Texas, El Paso):


In his second deftly researched and compelling book, Nayan Shah shines light on stories long obscured. Through descriptive writing and sharp analysis, he tells a fascinating wider tale of migration, intimacy, and survival in the North American West. Focusing on South Asian male migrants and the myriad intimate ties they forged with others, the book draws on a rich body of legal material in the United States and Canada, as well as elsewhere. It critically analyzes state records, using them to show how migrants were both tied to and living outside the limits of the nation-state. Shah complicates the historiography on migration and sexuality by putting in conversation literature on interracial ties and same-sex relations, which have rarely converged in scholarly inquiries.

The full review is available here. (Hat tip: H-Law)
Posted by Karen Tani at 12:30 AM