New Release: Cottrol's Comparative History of Race in the Americas

Out this month from the University of Georgia Press is The Long, Lingering Shadow: Slavery, Race, and Law in the American Hemisphere, by Robert J. Cottrol, GW Law.  The press explains: 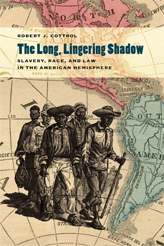 Students of American history know of the law’s critical role in systematizing a racial hierarchy in the United States. Showing that this history is best appreciated in a comparative perspective, The Long, Lingering Shadow looks at the parallel legal histories of race relations in the United States, Brazil, and Spanish America. Robert J. Cottrol takes the reader on a journey from the origins of New World slavery in colonial Latin America to current debates and litigation over affirmative action in Brazil and the United States, as well as contemporary struggles against racial discrimination and Afro-Latin invisibility in the Spanish-speaking nations of the hemisphere.

Ranging across such topics as slavery, emancipation, scientific racism, immigration policies, racial classifications, and legal processes, Cottrol unravels a complex odyssey. By the eve of the Civil War, the U.S. slave system was rooted in a legal and cultural foundation of racial exclusion unmatched in the Western Hemisphere. That system’s legacy was later echoed in Jim Crow, the practice of legally mandated segregation. Jim Crow in turn caused leading Latin Americans to regard their nations as models of racial equality because their laws did not mandate racial discrimination—a belief that masked very real patterns of racism throughout the Americas. And yet, Cottrol says, if the United States has had a history of more-rigid racial exclusion, since the Second World War it has also had a more thorough civil rights revolution, with significant legal victories over racial discrimination. Cottrol explores this remarkable transformation and shows how it is now inspiring civil rights activists throughout the Americas.


“Cottrol’s well-written book is a brilliant explication of the comparative treatment of persons of African ancestry in the western world. This is a must-read for those interested in the larger context of the black experience in the Western Hemisphere.”
—Davison M. Douglas, author of Jim Crow Moves North: The Battle over Northern School Segregation, 1865–1954

“This book is an extremely important, groundbreaking work of comparative synthesis that will be a must-read for students of race in the United States as well as in Latin America. It will be the definitive book on the comparative history of race and law in the Americas.”
—Ariela Gross, author of What Blood Won’t Tell: A History of Race on Trial in America