The Langum Charitable Trust has announced the 2012 winner of the Langum Prize in American Legal History/Biography: 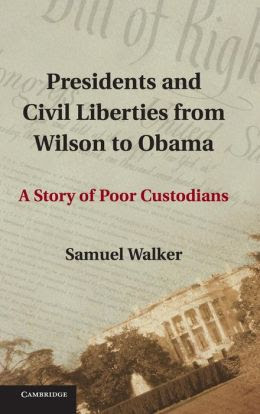 The winner of the 2012 David J. Langum, Sr. Prize in American Legal History or Biography is Samuel Walker for his Presidents and Civil Liberties from Wilson to Obama: A Story of Poor Custodians (Cambridge: Cambridge University Press, 2012). This work is a tour de force that that discusses virtually every significant event, judicial decision, or government activity affecting civil liberties in America from 1913 (Wilson's inauguration) to 2009 (Obama's inauguration). Organized primarily by Presidential actions or reactions, the author analyzes each President by his civil rights record, and, finding them all to be lacking, concludes with the subtitle of the book, that on the whole they have been poor custodians of Americans' civil liberties.

This is no dry discussion of changing legal doctrine. As appropriate, Walker is careful to bring to the discussion how changes in the economy, public opinion, social conditions, wartime fears, and protests have been inextricably involved with the expansion and contraction of civil rights. He brings a generally liberal and civil-libertarian outlook to his work, and is candid to disclose that he has had thirty years of involvement with the ACLU. Nonetheless, he is scrupulously fair. Where Presidents generally thought of as conservative did something favorable to civil liberties he describes it and renders praise. An example of this is President Harding's pardon of Eugene Debs, a notable victim of Wilson's World War I suppression of free speech. Likewise where Presidents generally thought of as liberal did something unfavorable to civil liberties, he describes that too and criticizes. An example of this is President Truman's Loyalty Program and its use of guilt by association. He makes a clear case that disrespect for civil rights is nonpartisan.
General readers should not be discouraged by the footnotes being placed where they should be positioned for convenience of reference: at the foot of each page. Although many facts and much history are packed within this 510 page volume, Walker has written an extremely readable account. DJL, Sr.

The Trust awarded Honorary Mention to R. Kent Newmyer for The Treason Trial of Aaron Burr: Law, Politics, and the Character Wars of the New Nation (Cambridge: Cambridge University Press, 2012). Read the citation after the jump.


This short well-written volume focuses, as implied by the title, on the trial of Aaron Burr for treason and high misdemeanor. Newmyer only briefly discusses background: the confusing facts of the alleged conspiracy to break off western portions of the nation, the motivations for Jefferson's denunciation of Burr, or the puzzling aspects of the prosecution (especially why Burr was not charged with a much more easily proven violation of the Neutrality Act in addition to the difficult Treason and High Misdemeanor charges). Instead, Newmyer concentrates on the pretrial activities and trial itself. Although the trial did much to elucidate the American law of treason, it cannot be said to have resolved the factual issues that lay behind the conflict. What Burr was really up to may always remain shrouded in mystery, and in our confusion we can take some comfort with the fact that it was equally confusing to the contemporaries of the events. DJL, Sr.