Pragmatic Lincoln, Silent Cal, Smuggling and More: This Week in the Book Pages 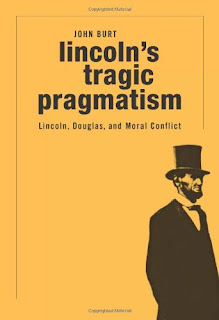 In the New York Times, you'll find plenty to read on presidents this Presidents Day weekend.  John Burt, Profess of English at Brandeis, has a new book on Lincoln.  Lincoln's Tragic Pragmatism: Lincoln, Douglas, and Moral Conflict (Belknap/Harvard) is "a work of history presented as an argument about moral conflict, and a work of philosophy presented as a rhetorical analysis of Lincoln's most famous speeches."  According to Steven B. Smith, "every serious student of Lincoln will have to read [it]"..."Burt sees Lincoln as a historicist for whom our moral conceptions emerge only over time and in ways that we can never fully comprehend."  Read on here.  John Burt discusses Lincoln's Tragic Pragmatism in the Book Review Podcast here.  For more on Lincoln, Greg Tobin reviews Daniel Stashower's The Hour of Peril: The Secret Plot to Murder Lincoln Before the Civil War (Minotaur), also reviewed in the Washington Post.

Also in the New York Times: a review of Coolidge by Amity Shlaes (Harper).  In a revival of Republican interest in Calvin Coolidge, "no one,"Jacob Heilbrunn writes, "is offering as silky a defense" of him than Amity Shlaes  who "has always had a deft finger on the conservative pulse."  And Joe Scarborough reviews Ike and Dick: Portrait of a Strange Political Marriage (Simon & Schuster) by Jeffrey Frank.

On war, The Wall Street Journal has a review of Stephen Budiansky's Blackett's War: The Men Who Defeated the Nazi U-Boats and Brought Science to the Art of Warfare (Knopf), and in the Washington Post has Gerard DeGroot's review of Max Boot's Invisible Armies: An Epic History of Guerrilla Warfare from Ancient Times to the Present (Liveright).

And in the Wall Street Journal, you'll find a review of Smuggler Nation: How Illicit Trade Made America (Oxford) by Peter Andreas.  As Eric Felter explains, Andreas "recounts the well-worn story of American independence less as a lofty quest for freedom per se than as a struggle for freedom from onerous trade restrictions."  Read on here.