Weiner's "Rule of the Clan"

Next month, Farrar, Straus and Giroux will publish Mark S. Weiner’s The Rule of the Clan: What an Ancient Form of Social Organization Reveals About the Future of Individual Freedom.  FS&G explains:


A lively, wide-ranging meditation on human development that offers surprising lessons for the future of modern individualism, The Rule of the Clan examines the constitutional principles and cultural institutions of kin-based societies, from medieval Iceland to modern Pakistan 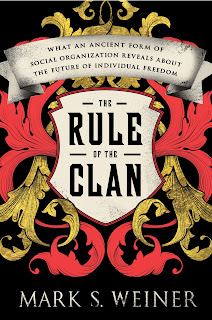 Mark S. Weiner, an expert in constitutional law and legal history, shows us that true individual freedom depends on the existence of a robust state dedicated to the public interest. In the absence of a healthy state, he explains, humans naturally tend to create legal structures centered not on individuals but rather on extended family groups. The modern liberal state makes individualism possible by keeping this powerful drive in check—and we ignore the continuing threat to liberal values and institutions at our peril. At the same time, for modern individualism to survive, liberals must also acknowledge the profound social and psychological benefits the rule of the clan provides and recognize the loss humanity sustains in its transition to modernity.

Masterfully argued and filled with rich historical detail, Weiner’s investigation speaks both to modern liberal societies and to developing nations riven by “clannism,” including Muslim societies in the wake of the Arab Spring.


Imagine that one fine morning you are strolling down the sidewalk on your way to work. Suddenly, a young jogger wearing headphones turns the corner, running swiftly, oblivious to the world around him. He crashes into you and as you hit the ground you feel a sharp pain in your arm, which quickly begins to swell. It’s broken. Soon after visiting your doctor, you contact your lawyer. He begins a civil suit against the jogger so that you can be compensated for your injury.  More.