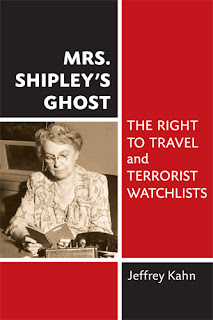 Today, when a single person can turn an airplane into a guided missile, no one objects to rigorous security before flying. But can the state simply declare some people too dangerous to travel, ever and anywhere? Does the Constitution protect a fundamental right to travel? Should the mode of travel (car, plane, or boat) or itinerary (domestic or international) make a constitutional difference? This book explores the legal and policy questions raised by government travel restrictions, from passports and rubber stamps to computerized terrorist watchlists.

In tracing the history and scope of U.S. travel regulations, Jeffrey Kahn begins with the fascinating story of Mrs. Ruth Shipley, a federal employee who almost single-handedly controlled access to passports during the Cold War. Kahn questions how far national security policies should go and whether the government should be able to declare some individuals simply too dangerous to travel. An expert on constitutional law, Kahn argues that U.S. citizens’ freedom to leave the country and return is a fundamental right, protected by the Constitution.

A blurb that matters:

“Despite an avalanche of writing about post-9/11 security policies, far too little attention has been paid to the increasingly important world of watchlists and their impact on the ability to travel. Jeff Kahn has filled this gap with a definitive account that deftly blends historical, legal, and policy analysis. And he has done it with real narrative flair. Mrs. Shipley’s Ghost will be required—and thoroughly enjoyable—reading for anyone interested in the intersection of data, security, and liberties.”
—Robert M. Chesney, University of Texas School of Law
Posted by Dan Ernst at 10:00 AM