Timothy D. Lytton, the Albert and Angela Farone Distinguished Professor of Law at Albany Law School, has published Kosher: Private Regulation in the Age of Industrial Food, with the Harvard University Press. 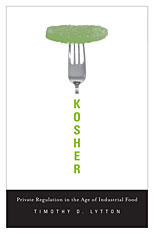 Generating over $12 billion in annual sales, kosher food is big business. It is also an unheralded story of successful private-sector regulation in an era of growing public concern over the government’s ability to ensure food safety. Kosher uncovers how independent certification agencies rescued American kosher supervision from fraud and corruption and turned it into a model of nongovernmental administration.

Currently, a network of over three hundred private certifiers ensures the kosher status of food for over twelve million Americans, of whom only eight percent are religious Jews. But the system was not always so reliable. At the turn of the twentieth century, kosher meat production in the United States was notorious for scandals involving price-fixing, racketeering, and even murder. Reform finally came with the rise of independent kosher certification agencies which established uniform industry standards, rigorous professional training, and institutional checks and balances to prevent mistakes and misconduct.

In overcoming many of the problems of insufficient resources and weak enforcement that hamper the government, private kosher certification holds important lessons for improving food regulation, Timothy Lytton argues. He views the popularity of kosher food as a response to a more general cultural anxiety about industrialization of the food supply. Like organic and locavore enthusiasts, a growing number of consumers see in rabbinic supervision a way to personalize today’s vastly complex, globalized system of food production.

“Kosher is one terrific book. It’s a wonderfully entertaining account of the squabbles, finger-pointing, and cutthroat competition that turned kosher certification from scandalous corruption to a respectable—and highly profitable—business. Today, if a food is labeled kosher, it is kosher, which is more than can be said of most claims on food labels. You don’t have to be Jewish to appreciate the fun in Timothy Lytton’s presentation of an unusually successful case study in business ethics.”—Marion Nestle, New York University, author of Food Politics

Lytton discusses the subject here. TOC after the jump.

Introduction: Why Kosher Food Certification Is Worthy of Attention

1. Rivalry and Racketeering: The Failures of Kosher Meat Supervision, 1850–1940

2. From Canned Soup to Packaged Nuts: The Rise of Industrial Kashrus

3. Sour Grapes and Self-Regulation: Creating an American Standard of Kashrus

4. Taking Stock: The Effectiveness and Integrity of the American Industrial Kashrus System

Conclusion: Industrial Kashrus as a Model of Private Third-Party Certification
Posted by Dan Ernst at 2:30 PM