Andrew Lyall, who taught land law and legal anthropology in the Faculty of Law at University College Dublin from 1980 until his retirement in 2007, has just published with Clarus Press, The Irish House of Lords: A Court Of Law In The Eighteenth Century.  The press reports: 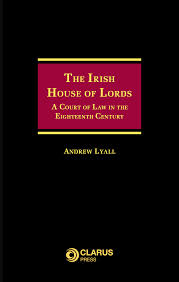 The Irish House of Lords: A Court Of Law In The Eighteenth Century is a unique work which examines the role of this final court of appeal between the years 1783 ‘til the Act of Union in 1800 placing the Court in the context of the political and constitutional history of the time. Utilising a broad range of sources, including recent and relevant academic studies as well as rare law reports and archives this book traces, in great detail, the importance of particular decisions of the Irish lords and what they tell us about penal laws and other phenomena of Irish life at that time.

This comparative analysis of decisions of the Irish and British lords, in the context of disagreements and disputes about jurisdiction between the islands of Ireland and Great Britain, builds on our current understanding of the issues involved and brings to it the fresh perspective of a scholar who understands the subtleties of particular legal decisions as well as their broader political reception. The author also examines the judges of the court, their individual contributions and judicial attitudes. This insight to the personalities and lives of some of the leading judges and others who were involved in key decisions in the eighteenth century brings an added dimension that many readers will find attractive and that supplements our existing knowledge of those individuals.

Some of the material discussed is relevant to a wider constitutional debate, one that stretches across the Atlantic Ocean to encompass the American colonies and that deals with the ostensible supremacy of the English King or parliament in the eighteenth century. The ownership of land, the interests of Irish families and the exploration of substantive legal issues in respect to ‘leases for lives renewable forever’ raises issues that might otherwise be overlooked by historians, not least in respect to leases for lives and the Penal laws. The book concludes with a chapter dedicated to the criminal jurisdiction of the Irish House of Lords dealing as it does with trials such as that of Lord Barry of Santry, as well as that of the Earl of Kingston.

Just before the Union with Great Britain in 1801 when the Irish parliament ceased to exist, the jurisdiction of the Irish court of Exchequer Chamber was expanded, which presaged a similar development in England in 1830 which does not seem to have been noted elsewhere. The book therefore helps to put the British legal system in a wider context and to point out the Irish influences upon it which have tended to be ignored in the past.

This book is more than a scholarly examination of points of law. It is a nuanced and intriguing insight into some of the people who contributed centrally to the development of that  distinctive Irish institution and an exploration of the impact of some of its key judgments on the ways in which everyday life might be organised in Ireland.

Dr. Lyall explains that the book “should be of some interest in the USA since the movement for greater independence, both legislative and judicial had parallels in North America which were realised at the time and discussed in the 20th century” in the following works: Charles McIlwain, The American Revolution: A Constitutional Interpretation (1923); R. Schuyler, Parliament and the British Empire (New York, 1929); Barbara A. Black, `The Constitution of Empire: The Case for the Colonists' (1976) 124 U. Pa. L. Rev. 1157; T. C. Grey, `Origins of the Unwritten Constitution: Fundamental Law in American Revolutionary Thought' (1978) 30 Stan. L. Rev. 843; J. P. Reid, `In Legitimate Stirps: The Concept of ``Arbitrary,'' the Supremacy of Parliament, and the Coming of the American Revolution' (1977) 5 Hofstra L. Rev. 459; and Greene, `From the Perspective of Law: Context and Legitimacy in the Origins of the American Revolution' (1986) 85 S. Atl. Q. 56.
Posted by Dan Ernst at 3:30 AM