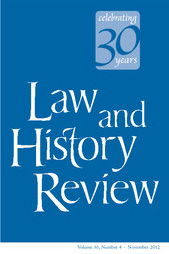 Law and History Review’s 31:2 issue (May 2013) is up on the Cambridge Journals website.  Here are the articles

Protective Labor Legislation in the Courts: Substantive Due Process and Fairness in the Progressive Era, by Claudio J. Katz

“Equals of the White Man”: Prosecution of Settlers for Violence Against Aboriginal Subjects of the Crown, Colonial Western Australia, by Amanda Nettelbeck

Jews or Germans? Nationality Legislation and the Restoration of Liberal Democracy in Western Europe after the Holocaust, by David Fraser and Frank Caestecker

“Our Militancy is in Our Openness”: Gay Employment Rights Activism in California and the Question of Sexual Orientation in Sex Equality Law, by Katherine Turk

Book reviews after the jump.
Ruth Mostern, “Dividing the Realm in Order to Govern”: The Spatial Organization of the Song State (960–1276 CE), reviewed by Nicolas Tackett

Eliga H. Gould, Among the Powers of the Earth: The American Revolution and the Making of a New World Empire, reviewed y David E. Narrett