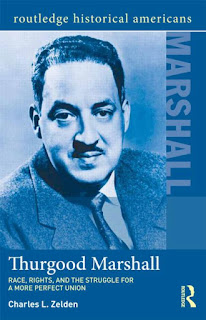 Thurgood Marshall was an Associate Justice of the US Supreme Court from 1967 to 1991. He was the first African American to hold that position, and was one of the most influential legal actors of his time. Before being appointed to the Supreme Court by President Lyndon Johnson, Marshall was a lawyer for the National Association for the Advancement of Colored People (NAACP), Federal Judge (1961-1965), and Solicitor General of the United States (1965-1966). Marshall won twenty-nine of thirty-two cases before the Supreme Court - most notably the landmark case of Brown v. Board of Education, which held segregated public schools unconstitutional. Marshall spent his career fighting racial segregation and legal inequality, and his time on the court establishing a record for supporting the "voiceless American." He left a legacy of change that still affects American society today.

Through this concise biography, accompanied by primary sources that present Marshall in his own words, students will learn what Marshall did (and did not do) during his life, why those actions were important, and what effects his efforts had on the larger course of American history.

Table of contents here.
Posted by Dan Ernst at 11:01 AM