Hello, everybody!  As a longtime reader of the Legal History Blog, I'm delighted to be a guest this month.  Many thanks to Dan Ernst for the invitation! 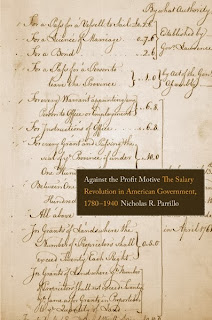 As Dan noted in a post last week, I'm the author of Against the Profit Motive: The Salary Revolution in American Government, 1780-1940, just published by Yale University Press.  The book shows that government officers in early America were typically paid on a "profit-seeking" basis -- by fees, bounties, and the like -- and it explains how lawmakers ultimately abolished these forms of compensation and replaced them with the fixed salaries that we now take for granted in the public sector.  I hope the book will be of interest to students of state formation, American political development, the sociology of bureaucracy, and the nature of "corruption."  I rely mainly on case studies that I constructed from primary sources, seeking to recreate how money-making influenced the workaday behavior of 19th-century officers in the areas of immigrant naturalization, disabled veterans' pensions, state and local property taxation, federal customs duties, criminal prosecution (state and federal), and naval warfare.  There's also briefer discussion of additional public endeavors, including diplomacy, the Homestead Act, jails, and penitentiaries.

At the Press's webpage for the book, they've posted the table of contents, the introductory chapter, and the blurbs.

Here's video of a talk I gave about the book a few days ago, sponsored by the Yale Law Library:

The video begins with a half hour of me summarizing and discussing the book.  Then, at about 33:00, there's commentary by my colleague Jerry Mashaw (author of Creating the Administrative Constitution: The Lost One Hundred Years of American Administrative Law).  Then, at about 47:00, there's Q&A with the audience.  (A few questions weren't picked up clearly by the microphones, but I tried to state the gist of each question at the start of my answer.)
Posted by Nicholas R. Parrillo at 10:30 AM