Cromwell Book Award to Levy for "Freaks of Fortune"

At last week's annual meeting of the American Society for Legal History, it was announced that the book prize annually awarded by the William Nelson Cromwell Foundation in consultation with a committee of the ASLH went to Jonathan Levy, Princeton University, for Freaks of Fortune: The Emerging World of Capitalism and Risk in America (Harvard University Press, 2012).  The citation reads as follows: 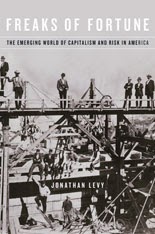 In this beautifully written, thoroughly researched, and consistently engaging book, Jonathan Levy brilliantly illuminates an abiding concern of American legal historians, the rise of liberal individualism, by treating the nineteenth-century United States as an era in the history of risk.  In Freaks of Fortune, “the release of individual creative energy” that James Willard Hurst identified as a fundamental goal of the age becomes the freeing of individuals to run their own risks.  With Levy’s help, we now see that one of “the conditions of freedom in the nineteenth-century United States” was the ability of individuals to offload their risks onto newly created systems of insurance and finance.  With a wonderful balance of analysis and detail, Levy reveals, as he puts it, “the crucial role of the law in setting the working rules of risk.”  Law allocated the risk of workplace injury to employees and declared when rebellion by seaborne slaves became an insurable peril.  It allowed financial intermediaries to funnel the savings of freedmen and -women to a transcontinental railroad and to package homesteaders’ mortgages into bonds for public sale.  It legitimated futures trading and ultimately set limits on what financiers could do with “other people’s money.”  This stunning book opens new fields of inquiry for legal historians and provides an invaluable perspective on current struggles to reconcile law and financial risk.

In commenting on Matthew Axtell's paper at the Preyer Award panel, Barbara Welke also noted the importance of Levy's book for legal historians.
Posted by Dan Ernst at 9:30 AM