Just out is the first volume of a constitutional law casebook written by three political scientists who take a historical approach to the topic, Howard Gillman, Mark A. Graber, and Keith E. Whittington’s American Constitutionalism (Oxford University Press).  As Professor Whittington explains:


This is a book of cases and materials for teaching the history of American constitutionalism, and we think it is something of a landmark in the extent to which it integrates a developmental perspective into constitutional law teaching and makes available historical context and non-U.S. Supreme Court materials for constitutional scholars and instructors.  The book includes everything from Gibbons v. Ogden to Daniel Webster’s Speech opposing a military draft, from Missouri v. Holland to Theodore Roosevelt’s remarks on presidential power, from Printz v. United States to Caroline Krass’ memo on the use of military force in Libya.  Volume 2 will provide similar coverage of constitutional rights and liberties, from Fletcher v. Peck to Amy v. Smith, from Goodridge v. Department of Public Health to Attorney General Ashcroft’s letter to the National Rifle Association. 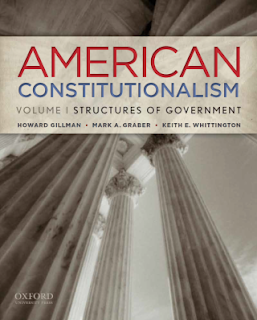 Constitutionalism in the United States is not determined solely by decisions made by the U.S. Supreme Court.  Moving beyond traditional casebooks, American Constitutionalism takes an innovative approach to the teaching of American constitutional law and politics.  Organized into the standard two-semester sequence, with volume one covering institutions and volume two covering rights and liberties, the text is distinctive in presenting the material in a historical organization within each volume and fully integrating the material into a political and legal context for students.

Many scholars have deepened our understanding of the development of our constitutional system, while also providing more interesting and sophisticated analyses of the political forces that shape constitutional debates and outcomes. American Constitutionalism has incorporated these lessons about how our constitutional system actually works while at the same time preserving what instructors and students find most engaging about the topic.  These new materials allow instructors to develop more interesting explanations and debates about familiar issues, while at the same time introducing students to vitally important questions that are often excluded from Court-centered textbooks.

American Constitutionalism offers a number of useful features.  It covers all important debates in American Constitution (not just those that have been recently litigated before the Supreme Court), organized by historical era.  It incorporates readings from all the prominent participants in those debates.  It clearly lays out the political and legal contexts of those materials.  It integrates more documents and cases than any other text on the market, including decisions made by elected officials and state courts.  The book offers numerous pedagogical features, including topical sections within each historical chapter, bulleted lists of major developments, explanatory headnotes for the readings, questions on court cases, illustrations and political cartoons, tables and figures, and suggested readings.  The text is supported by websites for students and teachers with extensive supplementary materials, including additional readings, sample syllabi, instructor guides, and presentation slides.

Other blurbs, the table of contents, and sample chapters are here.

Update
"Con Law in the Round," Ken Kersch's Balkinization post on American Constitutionalism is here.
Posted by Dan Ernst at 9:47 AM