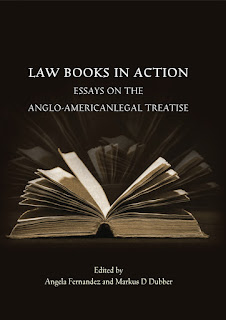 Two recent SSRN posts take up the history of legal publishing.  The first is the introduction to a collection of essays on the history of the legal treatise: Putting the Legal Treatise in its Place, by Angela Fernandez and Markus D. Dubber, University of Toronto Law, in Law Books in Action: Essays on the Anglo-American Legal Treatise, ed. Angela Fernandez and Markus D Dubber (Hart Publishing Co., April 2012)  Here is the abstract:


In 1976, while working on the first volume of The Transformation of American Law, Morton Horwitz noted that treatises were "the most neglected and really important sources of American legal history." Little has changed since then: treatises are still neglected, they are still really important, and not only in American legal history, but in common law history as a whole. This book aims to give legal treatises their due by undertaking an international and comparative analysis of the significance of the common law treatise in modern legal history and historiography.

In addition, Ross E. Davies, George Mason Law, addresses the history of a great American legal publisher in How West Law Was Made: The Company, its Products, and its Promotions, which appears in the Charleston Law Review 6 (Winter 2012): 231-282


Only in American law is West not primarily a geographical term. When we lawyers think of West we tend to think first of West Publishing Company – the preeminent source of printed law books since before we were born and of electronic law databases in recent years. But despite its importance to the development and dissemination of American law, West itself is a creature most of us do not know much about; we know only its products. That is not our fault, because there is only a little bit of information available, and much of that little bit is hard to find. This Article offers some perspective on the roots of West, the publishing company, and of its primacy (or at least the primacy of its brand) in the consciousness of modern American lawyers.

Here are the contents of Law Books in Action:

2. 'Of Institutes and Treatises': Blackstone's Commentaries, Kent's Commentaries and Murdoch's Epitome of the Laws of Nova-Scotia Philip Girard

5. A Province of Jurisprudence?: Invention of a Law of Constitutional Conventions Roman J Hoyos

7. Of Treatises and Textbooks: The Literature of the Criminal Law in Nineteenth-Century Britain Lindsay Farmer

8. Truth and Privilege: Libel Treatises and the Transmission of Legal Norms in the Early Nineteenth-Century Anglo-American World Lyndsay Campbell

11. Commentary: Effects of Scale: Toward a History of the Literature of Law Christopher Tomlins
Posted by Dan Ernst at 12:30 AM