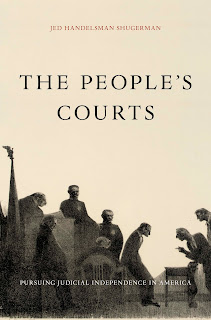 OK, now for my first post about my book, The People’s Courts. Almost 90% of state judges face some kind of popular election, and state courts handle well over 90% of America’s legal disputes. Money has been flooding state supreme court elections over the last two decades (over $200 million dollars between 2000 and 2010), mostly from business interests for Republican candidates and from trial lawyers for Democratic candidates. At the same time, these races have gotten nastier and more deceptive, and the vitriol from the campaign trail is spilling over into the judges’ chambers and more ad hominem decision writing.

I had no idea about this issue until I was a first-year law student at Yale in 1999. One of my spring electives was Capital Punishment with Stephen Bright, president of the Southern Center for Human Rights and one of the most respected and tireless death penalty litigators in the country. The class was one of my highlights in law school, particularly because it was an outstanding doctrinal class on criminal procedure and civil procedure (the habeas process). Professor Bright invited a guest, Penny White, a former Tennessee Supreme Court justice. She was a former judge because just three years earlier, she had been voted off the bench. She told a fascinating story of how she became a judge through a political network. In 1996, she was part of a unanimous ruling overturning a death sentence in State v. Odom (but leaving in place the murder conviction). She was the only judge from the panel up for a retention election that fall, and she was defeated in a campaign focused entirely on that decision. An additional twist is that the state had petitioned for a rehearing of the court’s decision to overturn the death sentence, so the rehearing was pending during the re-election campaign. Judge White decided that judicial ethics barred her from publicly defending her vote while the rehearing was pending.

I was horrified by the story. I found that as I began studying law, I kept asking myself, “Where did we get these rules and institutions?” I had already begun working on the origins of fault and strict liability in American tort law, and suddenly, I found myself asking, “Where did we get this crazy idea of electing judges?” These questions put me on a path to apply for a PhD in history. I started with a focus on articles about tort law, federal courts, and the history of judicial review. After finishing my clerkship and my oral examinations, I began my dissertation research on the origins of judicial elections in 2004. And I began the project deeply skeptical of the entire idea. The question echoed in my head as I read countless nineteenth-century documents, newspapers, and state constitutional convention debates, “What were you thinking?” My skepticism led me to an assumption that special political and economic interests must have driven this story. I tried to piece together the rapid spread of judicial elections in the 1840s and 1850s in terms of debtor-creditor politics, New York’s Anti-Rent struggle between tenant farmers and landlords, and slavery vs. anti-slavery. But none of these stories made sense of the overall national movement.

I can remember my own turning point in 2006. I stepped back from several months of archival work to put these documents into context. Late in 2005, Sean Wilentz had published The Rise of American Democracy: Jefferson to Lincoln, and then Daniel Walker Howe published What Hath God Wrought: The Transformation of America, 1815-1848. These two books helped me see the national events more clearly, and they also helped me shift my mindset. They each wrote about the Panics of 1837 and 1839 and the sharp depression of the early 1840s, in which eight states defaulted on their debts.

I decided to dig into this story more closely, and it turns out that "digging" had been one source of the crisis. State legislatures had overspent on canals, roads, and railroads. Many Americans blamed a corrupt appointment process for doling out expensive privileges to patronage machines, and wanted more checks on governors and legislators. Their appointment powers had allowed party insiders and special interests to capture the courts and run amok. As the nation emerged from the depression, about a dozen state conventions met between the mid-1840s and early 1850s to limit spending, legislative power, and patronage politics. Then I went outside the work of traditional historians, and I found the historical work of two economists, John Wallis and Andrew Hanssen, particularly helpful. For the first time, I could see the coherent logic in the movement for judicial elections. Earlier, I had been dismissive of the recurring argument in these conventions that elections would promote judicial independence, skeptical that it was a smokescreen for politicizing the courts. Suddenly, I understood that some of them were sincerely committed judicial independence – independence from the other branches of government. Their vision of judicial independence was more deeply connected to the separation of powers and a goal of increased judicial power. They grasped a version of the principal-agent problem, and believed that direct elections would empower the courts to defend the “principal,” the people, against legislative corruption and capture. They argued that the people would choose more impartial, fair, and assertive judges than the appointment process had. And it turns out that the first generation of elected judges then exercised its democratically inspired confidence, striking down far more statutes than any earlier era of appointed judges, and developing new countermajoritarian theories for their powers of judicial review. I was able to make sense of my archival work with this new framing in economic and political context, and I finished the dissertation in the spring of 2008. (After finishing the early 19th century story in 2008, I turned to the late-19th and 20th century stories).