The Great Outdoors: This Week in the Book Pages 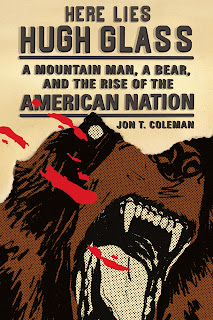 "In 1823 a trapper along the Missouri River named Hugh Glass was horribly mauled by a grizzly bear and left for dead by his hunting party. But he didn't die." So begins the Wall Street Journal review of Here Lies Hugh Glass: A Mountain Man, a Bear, and the Rise of the American Nation (Hill & Wang), by Jon T. Coleman. Legend has it that


[Glass] crawled for miles, eating bugs and carrion, and kept himself alive with rage until he had recovered enough to hike 200 miles to the nearest fort. Later, he tracked down some of the men who had left him for dead—but instead of exacting revenge, as he had set out to do, he merely told them off.

Coleman (Notre Dame) "uses the Glass saga as the jumping off point for a vigorously written meditation on 19th-century America's encounter with the wilderness." Ultimately, Coleman advances a claim about "the meaning of the West to America's identity."


Also in the WSJ: reviews of A Disposition to Be Rich: How a Small-Town Pastor's Son Ruined an American President, Brought on a Wall Street Crash, and Made Himself the Best-Hated Man in the United States (Knopf), by Geoffrey C. Ward (here), and The Years of Lyndon Johnson: The Passage of Power (Knopf), by Robert Caro (here).

The Los Angeles Times covers (here) American Canopy: Trees, Forests and the Making of a Nation (Scribner), Eric Rutkow. The book analyzes "how North American virgin forest gave rise to a new nation, and how the U.S. has reduced that resource from close to a billion acres of ancient woodland to what is now more like 750 million acres of often young trees." Reviewer Emily Green wishes that there was more evidence of actual interaction with the forests ("one can't be sure if [Rutkow] knows a cedar from a pine") and criticizes the book's lack of attention to Native American forestry practices.

The Browser has an interview with legal historian Ken Mack (Harvard Law School), on his new book Representing the Race (Harvard University Press). Here's a snippet:


Q: What did you learn about the relationship between race and the law by writing it?

A: By looking at the civil rights struggle through the lives of black civil rights lawyers we learn about the contested nature of racial identity, even in an era where segregation was supposed to make race into something fixed, not fluid.

Mack also recommends five books on the construction of race in America.

Also in TNR: Eric Posner reviews (here) Uncontrolled: The Surprising Payoff of Trial-and-Error for Business, Politics, and Society (Basic Books), by Jim Manzi. It is a plea for policymakers to utilize empirical research -- specifically, randomized field trials -- in their decisionmaking. Paul Starr covers (here) two books on compromise: Avishai Margalit's On Compromise and Rotten Compromises and Amy Gutmann and Dennis Thompson's The Spirit of Compromise: Why Governing Demands It and Campaigning Undermines It, both from Princeton University Press.

A few other book-related tidbits from around the web: