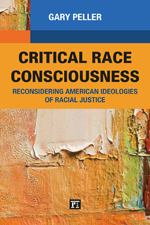 Despite the apparent racial progress reflected in Obama’s election, the African American community in the United States is in a deep crisis on many fronts—economic, intellectual, cultural, and spiritual. This book sets out to trace the ideological roots of this crisis. Challenging the conventional historical narrative of race in America, Peller contends that the structure of contemporary racial discourse was set in the confrontation between liberal integrationism and black nationalism during the 1960s and 1970s. Arguing that the ideology of integrationism that emerged was highly conservative, apologetic, and harmful to the African American community, this book is sure to provide a new lens for studying—and learning from—American race relations in the twentieth century.

Georgetown's press release is here.  It reproduces blurbs from Cornel West ("a profound inquiry into the prevailing frameworks through which we understand race in America"), Kimberlé Crenshaw ("a must-read for anyone interested in understanding the link between critical race theory and radical social thought more generally"), and Duncan Kennedy ("Peller's brilliant critique of color blindness and his case for race consciousness are more important and valuable than ever”).
Posted by Dan Ernst at 12:30 AM