Mack, Representing the Race: The Creation of the Civil Rights Lawyer

Representing the Race: The Creation of the Civil Rights Lawyer by Kenneth Mack has just been published by Harvard University Press.  Here's the book description: 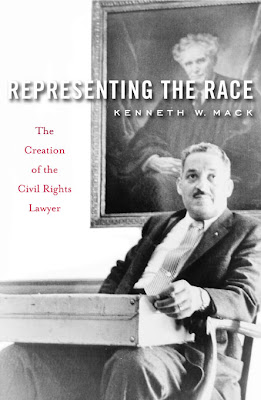 Representing the Race tells the story of an enduring paradox of American race relations, through the prism of a collective biography of African American lawyers who worked in the era of segregation. Practicing the law and seeking justice for diverse clients, they confronted a tension between their racial identity as black men and women and their professional identity as lawyers. Both blacks and whites demanded that these attorneys stand apart from their racial community as members of the legal fraternity. Yet, at the same time, they were expected to be “authentic”—that is, in sympathy with the black masses. This conundrum, as Kenneth W. Mack shows, continues to reverberate through American politics today.

Mack reorients what we thought we knew about famous figures such as Thurgood Marshall, who rose to prominence by convincing local blacks and prominent whites that he was—as nearly as possible—one of them. But he also introduces a little-known cast of characters to the American racial narrative. These include Loren Miller, the biracial Los Angeles lawyer who, after learning in college that he was black, became a Marxist critic of his fellow black attorneys and ultimately a leading civil rights advocate; and Pauli Murray, a black woman who seemed neither black nor white, neither man nor woman, who helped invent sex discrimination as a category of law. The stories of these lawyers pose the unsettling question: what, ultimately, does it mean to “represent” a minority group in the give-and-take of American law and politics?


Representing the Race is a wonderful excavation of the first era of civil rights lawyering, the product of prodigious research and a keen eye for revealing detail.
--Randall L. Kennedy, author of The Persistence of the Color Line: Racial Politics and the Obama Presidency

Ken Mack brings to this monumental work not only a profound understanding of law, biography, history and racial relations but also an engaging narrative style that brings each of his subjects dynamically alive. It is a truly wonderful book.
--Doris Kearns Goodwin, author of Team of Rivals: The Political Genius of Abraham Lincoln

A stunning reinterpretation of civil rights history for a twenty-first century audience, bringing to vivid life both famous and forgotten historical lawyers. Anyone who wishes to understand race relations in our modern era, including the racial politics that surrounds our first African American president, should read this book.
--Vernon Jordan

Ken Mack has written a rare book that forces us to reconsider the long history of civil rights. He offers an extraordinary account of a generation of attorneys who fought against Jim Crow and for professional recognition when the odds were against them. This is a masterwork.
--Thomas J. Sugrue, author of Sweet Land of Liberty: The Forgotten Struggle for Civil Rights in the North

Although civil rights lawyers occupy a central place in our nation's history, the nuances of their own position with regard to race, class, and professional stature bear closer examination. In this compelling new book, Mack recreates their individual and collective struggles and the triumphs that defined an era.
--Henry Louis Gates, Jr., W. E. B. Du Bois Institute for African and African American Research, Harvard University

Ken discusses the book here.
Posted by Mary L. Dudziak at 9:00 AM