Hull's "The Woman Who Dared to Vote"

A Rutgers press release has drawn my attention to the publication of The Woman Who Dared to Vote: The Trial of Susan B. Anthony, by N.E.H. Hull, Rutgers-Camden [now and forever] Law.  The book is the latest in the University Press of Kansas's series, "Landmark Law Cases and American Society." 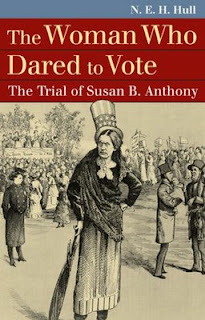 Just as the polls opened on November 5, 1872, Susan B. Anthony arrived and filled out her "ticket" for the various candidates. But before it could be placed in the ballot box, a poll watcher objected, claiming her action violated the laws of New York and the state constitution. Anthony vehemently protested that as a citizen of the United States and the state of New York she was entitled to vote under the Fourteenth Amendment. The poll watchers gave in and allowed Anthony to deposit her ballots. Anthony was arrested, charged with a federal crime, and tried in court.

Primarily represented within document collections and broader accounts of the fight for woman suffrage, Anthony's controversial trial-as a landmark narrative in the annals of American law-remains a relatively neglected subject. N. E. H. Hull provides the first book-length engagement with the legal dimensions of that narrative and in the process illuminates the laws, politics, and personalities at the heart of the trial and its outcome.

Hull summarizes the woman suffrage movement in the post-Civil War era, reveals its betrayal by former allies in the abolitionist movement, and describes its fall into disarray. She then chronicles Anthony's vote, arrest, and preliminary hearings, as well as the legal and public relations maneuvering in the run-up to the trial. She captures the drama created by Anthony, her attorneys, the politically ambitious prosecutor, and presiding judge-and Supreme Court justice-Ward Hunt, who argued emphatically against Anthony's interpretation of the Reconstruction Amendments as the source of her voting rights. She then tracks further relevant developments in the trial's aftermath-including Minor v. Happersett, another key case for the voting rights of women-and follows the major players through the eventual passage of the Nineteenth (or "Susan B. Anthony") Amendment.

Hull's concise and readable guide reveals a story of courage and despair, of sisterhood and rivalry, of high purpose and low politics. It also underscores for all of us how Anthony's act of civil disobedience remains essential to our understanding of both constitutional and women's history-and why it all matters.


"A truly refreshing, invigorating, and spirited story! Hull's close legal study of the charges against Anthony breaks new ground and significantly enlarges our understanding of her trial, its degeneration into a theater of the absurd, and its setback for U.S. women's rights and recognition as citizens. A must read for students of women's history and law alike."-Kathleen Barry, author of Susan B. Anthony: A Biography of a Singular Feminist

"Anthony's trial comes to life in this readable and absorbing account. Hull provides not just new information, but context and setting as well. . . . A significant contribution."-Jean H. Baker, author of Sisters: The Lives of America's Suffragists

In the Rutgers press release, Professor Hull explains that the "book had been one of those bucket list projects I'd always wanted to do. The woman suffrage issue was critical to the women's movement in the 19th century and Susan B. Anthony had not yet become the face of woman suffrage. She was well known, but sometimes stood in the shadows of other women. It was this trial that pushed her to the forefront of the movement."
Posted by Dan Ernst at 2:00 PM