A Symposium on Pue's "Lawyers' Empire" 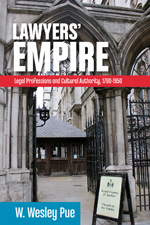 We've previously noted the publication of W. Wesley Pue's Lawyers’ Empire: Legal Professions and Cultural Authority, 1780-1950 (UBC Press, 2016).  The book is now the subject of a special issue of the International Journal of the Legal Profession, edited by David Sugarman and Avrom Sherr.  It will be published in March 2017 as IJLP 24:1, but individual contributions are available now on the journal’s website.  (A recording of Professor Sugarman's comments on Professor Pue and his book is available here.)  Here are the symposium's contents:

The commonwealth of lawyers?
Harry Arthurs