Mark Douglas McGarvie, College of William and Mary, has published Law and Religion in American History: Public Values and Private Conscience with the Cambridge University Press: 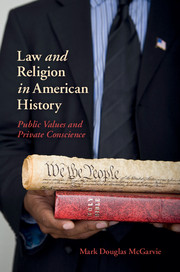 This book furthers dialogue on the separation of church and state with an approach that emphasizes intellectual history and the constitutional theory that underlies American society. Mark Douglas McGarvie explains that the founding fathers of America considered the right of conscience to be an individual right, to be protected against governmental interference. While the religion clauses enunciated this right, its true protection occurred in the creation of separate public and private spheres. Religion and the churches were placed in the private sector. Yet, politically active Christians have intermittently mounted challenges to this bifurcation in calling for a greater public role for Christian faith and morality in American society. Both students and scholars will learn much from this intellectual history of law and religion that contextualizes a four-hundred-year-old ideological struggle.

“In Law and Religion in American History, Mark McGarvie makes a persuasive case for his arresting argument that the ongoing effort to Christianize America by government fiat has never been very American, nor even very Christian.”  Woody Holton, Bancroft Prize-winning author of Abigail Adams

“Mark McGarvie's book is a splendidly illuminating historical synthesis of Americans' struggle to reconcile two of the most powerful and compelling ideological forces in their history. It is a major achievement, simultaneously expansive in its conceptual reach and sharply focused in its method.”  David Konig, Washington University, St Louis

TOC after the jump.
Prologue: Colonial America Perpetuates State Religion
1 - Revolution in Thought and Social Organization: The Legal Hegemony of Jeffersonian Liberalism, 1776–1828
2 - A Christian Counter-revolution and a New Vision of American Society, 1828–1865
3 - Regulating Behavior and Teaching Morals: The Uses of Religion, 1865–1937
4 - The Rights Revolution, 1937–2015
Epilogue: The Significance of History and a Reconsideration of Original Intent
Bibliographic Essay