Edward B. Foley, the Charles W. Ebersold and Florence Whitcomb Ebersold Chair at the Ohio State University College of Law, has published Ballot Battles: The History of Disputed Elections in the United States, with the Oxford University Press: 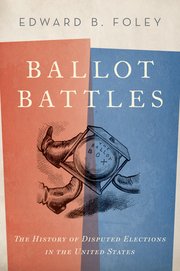 The 2000 presidential race resulted in the highest-profile ballot battle in over a century. But it is far from the only American election determined by a handful of votes and marred by claims of fraud. Since the founding of the nation, violence frequently erupted as the votes were being counted, and more than a few elections produced manifestly unfair results. Despite America's claim to be the world's greatest democracy, its adherence to the basic tenets of democratic elections-the ability to count ballots accurately and fairly even when the stakes are high-has always been shaky. A rigged gubernatorial election in New York in 1792 nearly ended in calls for another revolution, and an 1899 gubernatorial race even resulted in an assassination. Though acts of violence have decreased in frequency over the past century, fairness and accuracy in ballot counting nonetheless remains a basic problem in American political life.

In Ballot Battles, Edward Foley presents a sweeping history of election controversies in the United States, tracing how their evolution generated legal precedents that ultimately transformed how we determine who wins and who loses. While weaving a narrative spanning over two centuries, Foley repeatedly returns to an originating event: because the Founding Fathers despised parties and never envisioned the emergence of a party system, they wrote a constitution that did not provide clear solutions for high-stakes and highly-contested elections in which two parties could pool resources against one another. Moreover, in the American political system that actually developed, politicians are beholden to the parties which they represent - and elected officials have typically had an outsized say in determining the outcomes of extremely close elections that involve recounts. This underlying structural problem, more than anything else, explains why intense ballot battles that leave one side feeling aggrieved will continue to occur for the foreseeable future.

American democracy has improved dramatically over the last two centuries. But the same cannot be said for the ways in which we determine who wins the very close races. From the founding until today, there has been little progress toward fixing the problem. Indeed, supporters of John Jay in 1792 and opponents of Lyndon Johnson in the 1948 Texas Senate race would find it easy to commiserate with Al Gore after the 2000 election. Ballot Battles is not only the first full chronicle of contested elections in the US. It also provides a powerful explanation of why the American election system has been-and remains-so ineffective at deciding the tightest races in a way that all sides will agree is fair.

We understand that Professor Foley is Reporter for the American Law Institute's project in its Principles of the Law series, Election Administration: Non-Precinct Voting and Resolution of Ballot-Counting Disputes.  A draft of Part III (Procedures for the Resolution of a Disputed Presidential Election) may be downloaded here.  H/t: JMD3
Posted by Dan Ernst at 12:30 AM