In the New York Times, John Fabian Witt reviews William Donarski’s biography of Richard Posner (in which we “see Posner privately skewering colleagues [and] calling himself “a monster” and disdaining conventional morality”) and gives the reader a primer on Posner’s theories. In the same paper, James Goodman reviews two books about black republicans. One, Black Republicans and the Transformation of the GOP, is by historian Joshua D. Farrington. 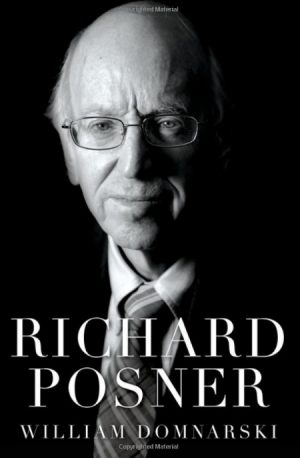 Also in the NYT, Carol Anderson reviews Blood at the Root, in which Patrick Phillips tells the story of the racial violence that forced African Americans out of Forsyth County, GA in 1912. The vigilante justice has a legal equivalent: after a false confession to the murder of a white woman, one black teenager is lynched and his co-defendants are escorted back to the county to be sentenced to death. The book, Anderson says, “provides powerful insight into the motives of the various class and business sectors in the county’s white community, which conducted, acquiesced to or benefited from the terror.” It is also featured in the NY Times Book Review Podcast.

In The Guardian features a review of The Trials of the King of Hampshire, a book about the insanity trial of the third earl of Portsmouth (“the lengthiest, most costly insanity case in British legal history, running at two guineas a minute”) and the treatment of the mentally ill in Georgian England.

In the same publication, there’s a review of Ian Cobain’s The History Thieves, which reveals the great efforts that British Imperial officers undertook to destroy colonial records:


In the NYRB, Maya Jassanoff reviews The Empire of Necessity: Slavery, Freedom, and Deception in the New World

by Greg Grandin (“about an uprising on a slave ship off the coast of Chile and the successful effort to end it”) and New England Bound: Slavery and Colonization in Early America

by Wendy Warren (an exploration of slavery in New England, which “long held up as a model of America at its communitarian best, actually rested on the backs of “numerous enslaved and colonized people.”).

In Slate, June Thomas reviews John Preston’s A Very English Scandal: Sex, Lies, and a Murder Plot in the Houses of Parliament, which focuses on the misdeeds of 1960s MP and Liberal leader John Thorpe. It also features an account of the fight to decriminalize male homosexuality in Britain, and a charming anecdote about Lord Arran, the “the quirky peer who moved the bill in the House of Lords.” Arran’s previous speeches in the House had been “to advocate for the rights of badgers.” “Later, after a successful but bruising legislative battle, Arran was asked why homosexual law reform had passed while badgers were still unprotected. “He paused,” Preston reports, “and then said ruminatively, ‘There are not many badgers in the House of Lords.’ ”

In the Washington Post, Louisa Thomas reviews Alan Taylor’s “American Revolutions.” This book is a sequel to Taylor’s book “American Colonies and describes the Revolution as a fight with the Spanish, French and Native Americans as well as the British (he “jokes that he nearly took a fellow historian’s suggestion, with a nod to the “Die Hard” movies, to title it “American Revolutions: Colonize Harder.”) Eric Foner also reviews the book in the London Review of Books. In the same publication,Yonatan Mendel reviews 1929: Year Zero of the Arab-Israeli Conflict by Hillel Cohen, translation by Haim Watzman.

In the New Rambler, Jeffrey Pojanowski reviews Administrative Justice and the Supremacy of Law in the United States, by John Dickinson. Dickinson’s book, written in 1929, “stakes out and defends what has become known as the “appellate review” model for judicial involvement in the administrative state.” Dickinson understood the problems with judicial intervention, Pojanowski explains, but advocated “the supremacy of law” because law “tends to make progress more solid, consistent, and cautious.” In the New Republic, Matthew Simpson reviews Michael Klarman’s The Framers’ Coup: The Making of the United States Constitution, (“At the risk of oversimplifying—the book comes in at more than 800 pages—Klarman argues that the Constitution is undemocratic because it was designed to protect wealthy merchants and landowners from the redistributive tendencies of popular government.” In the same publication, Elaine Showalter reviews a series of books and articles about Ruth Bader Ginsberg.

New Books Network features an interview with Daniel Amsterdam on Roaring Metropolis: Businessmen’s Campaign for a Civic Welfare State (an investigation of how Gilded Age business leaders pushed for extensive government spending on social programs).
Posted by Smita Ghosh at 3:00 AM