K. Sabeel Rahman, Brooklyn Law School (and a fellow at the New American Foundation and the Roosevelt Institute) has published Democracy against Domination with the Oxford University Press: 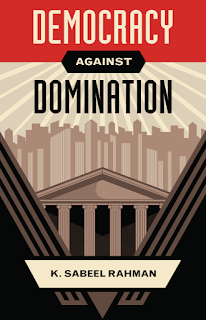 In 2008, the collapse of the US financial system plunged the economy into the worst economic downturn since the Great Depression. In its aftermath, the financial crisis pushed to the forefront fundamental moral and institutional questions about how we govern the modern economy. What are the values that economic policy ought to prioritize? What institutions do we trust to govern complex economic dynamics? Much of popular and academic debate revolves around two competing approaches to these fundamental questions: laissez-faire defenses of self-correcting and welfare-enhancing markets on the one hand, and managerialist turns to the role of insulated, expert regulation in mitigating risks and promoting growth on the other. In Democracy Against Domination, K. Sabeel Rahman offers an alternative vision for how we should govern the modern economy in a democratic society.

Drawing on a rich tradition of economic reform rooted in the thought and reform politics of early twentieth century progressives like John Dewey and Louis Brandeis, Rahman argues that the fundamental moral challenge of economic governance today is two-fold: first, to counteract the threats of economic domination whether in the form of corporate power or inequitable markets; and second, to do so by expanding the capacity of citizens themselves to exercise real political power in economic policymaking. This normative framework in turn suggests a very different way of understanding and addressing major economic governance issues of the post-crisis era, from the challenge of too-big-to-fail financial firms, to the dangers of regulatory capture and regulatory reform.

Synthesizing a range of insights from history to political theory to public policy, Democracy Against Domination offers an exciting reinterpretation of progressive economic thought; a fresh normative approach to democratic theory; and an urgent hope for realizing a more equitable and democratically accountable economy through practical reforms in our policies and regulatory institutions.

Professor Rahman’s webpage on the book is here.
Posted by Dan Ernst at 9:32 AM