McBride, "Mr. Mothercountry: The Man Who Made the Rule of Law"

New from Oxford University Press: Mr. Mothercountry: The Man Who Made the Rule of Law (Sept. 2016), by Keally McBride (University of San Francisco). A description from the Press: 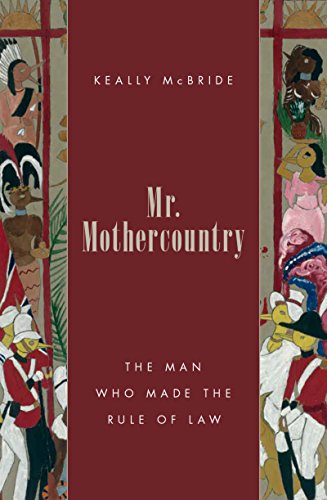 Today, every continent retains elements of the legal code distributed by the British empire. The British empire created a legal footprint along with political, economic, cultural and racial ones. One of the central problems of political theory is the insurmountable gap between ideas and their realization. Keally McBride argues that understanding the presently fraught state of the concept of the rule of law around the globe relies upon understanding how it was first introduced and then practiced through colonial administration--as well as unraveling the ideas and practices of those who instituted it. The astonishing fact of the matter is that for thirty years, between 1814 and 1844, virtually all of the laws in the British Empire were reviewed, approved or discarded by one individual: James Stephen, disparagingly known as "Mr. Mothercountry." Virtually every single act that was passed by a colony made its way to his desk, from a levy to improve sanitation, to an officer's pay, to laws around migration and immigration, and tariffs on products. Stephen, great-grandfather of Virginia Woolf, was an ardent abolitionist, and he saw his role as a legal protector of the most dispossessed. When confronted by acts that could not be overturned by reference to British law that he found objectionable, he would make arguments in the name of the "natural law" of justice and equity. He truly believed that law could be a force for good and equity at the same time that he was frustrated by the existence of laws that he saw as abhorrent.

In Mr. Mothercountry, McBride draws on original archival research of the writings of Stephen and his descendants, as well as the Macaulay family, two major lineages of legal administrators in the British colonies, to explore the gap between the ideal of the rule of law and the ways in which it was practiced and enforced. McBride does this to show that there is no way of claiming that law is always a force for good or simply an ideological cover for oppression. It is both. Her ultimate intent is to illuminate the failures of liberal notions of legality in the international sphere and to trace the power disparities and historical trajectories that have accompanied this failure. This book explores the intertwining histories of colonial power and the idea of the rule of law, in both the past and the present, and it asks what the historical legacy of British Colonialism means for how different groups view international law today.


"Keally McBride has written a brilliant and important book that takes head-on our sacrosanct myth of 'the rule of law' by means of a sustained and deeply historical analysis of nineteenth century British colonial rule. This is a formative book that challenges and surely will reshape the way we understand the rule of law-no longer as that monolithic, straightforward panacea to our political problems, but instead as a strategic, complex, and shrewd weapon of political struggle, an instrument of politics that is deployed in myriad ways to achieve ends both noble and ignoble: a chameleon-like apparatus embedded in relations of power, a political device that more than anything calls, in McBride's words, 'for humility above all.' I can't wait to engage the debates that it will spawn." -- Bernard E. Harcourt

"In Mr. Mothercountry, Keally McBride has done something extraordinary. She discovered an administrator of the British empire-James Stephen-who not only promoted the rule of law, but could also be said to have invented it. Stephen was a true believer and sought to create transparent, clear and fair rules in the British colonies that he helped to oversee. Mr. Mothercountry speaks both to the possibilities inherit in the concept of the rule of law as well as its limitations, the way that it readily gets hijacked by imperial and commercial interests, and the impossibility of keeping it purely neutral and non-arbitrary. This book is a tour de force, required reading for anyone interested in the colonial origins of an idea that remains a central aspect of the way that contemporary states view themselves and their connection to law and sustaining forms of political authority." --James Martel