Sloss on the Death of Treaty Supremacy

New from Oxford University Press: The Death of Treaty Supremacy: An Invisible Constitutional Change (Oct. 2016), by David L. Sloss (Santa Clara University - School of Law). A description from the Press: 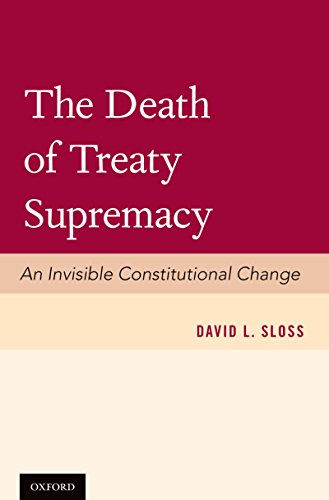 This book provides the first detailed history of the Constitution's treaty supremacy rule. It describes a process of invisible constitutional change. The traditional supremacy rule provided that all treaties supersede conflicting state laws; it precluded state governments from violating U.S. treaty obligations. Before 1945, treaty supremacy and self-execution were independent doctrines. Supremacy governed the relationship between treaties and state law. Self-execution governed the division of power over treaty implementation between Congress and the President. In 1945, the U.S. ratified the UN Charter, which obligates nations to promote human rights "for all without distinction as to race." In 1950, a California court applied the Charter's human rights provisions and the traditional treaty supremacy rule to invalidate a state law that discriminated against Japanese nationals. The implications were shocking: the decision implied that the United States had effectively abrogated Jim Crow laws throughout the South by ratifying the UN Charter. In response, conservatives mobilized support for a constitutional amendment, known as the Bricker Amendment, to abolish the treaty supremacy rule. The amendment never passed, but Bricker's supporters achieved their goals through de facto constitutional change. The de facto Bricker Amendment created a novel exception to the treaty supremacy rule for non-self-executing (NSE) treaties. The exception permits state governments to violate NSE treaties without authorization from the federal political branches. The death of treaty supremacy has significant implications for U.S. foreign policy and for U.S. compliance with its treaty obligations.


"The Death of Treaty Supremacy makes a major contribution to our understanding of American constitutionalism. It demonstrates the evolutionary nature of constitutional law, identifies the complex practical forces that drive its evolution, and highlights yet another flaw in constitutional 'originalism.' It shows that historical changes have transformed the Constitution's meaning even on an issue where the 'original' meaning was actually clear and specific--that properly ratified treaties are 'supreme' over state law." -Edward A. Purcell Jr.

"David Sloss has written a fascinating case study on a central constitutional queýstion - how does the interpretation of the constitution change? Moreover, Sloss has taken as his example a pressing issue of contemporary constitutional debate- the role of treaties as domestic law in state and federal courts. His fine-grained and wide-reaching research and his thoughtful analysis benefits us all." -Judith Resnik

The introduction is available here, on SSRN.
Posted by Karen Tani at 12:30 PM