We've got a robust roundup of reviews for your Sunday reading pleasure. There's a host of various (Roosevelt and Hitler-centric) biographies recently under review.  In The Washington Post is a review of Eleanor and Hick: The Love Affair That Shaped a First Lady by Susan Quinn.  In the New York Review of Books is a review of Joseph Lelyveld's His Final Battle: The Last Months of Franklin Roosevelt.  Finally, the New York Times carries a review of Volker Ulrich's Hitler: Ascent, 1889-1939.

In The Wall Street Journal (and sadly behind a paywall) is a review of Laura Weinrib's The Taming of Free Speech: America’s Civil Liberties Compromise. 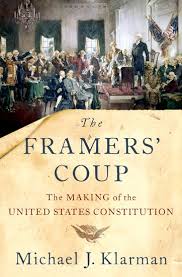 The New Books Network has an interview with Jason Pierce on his Making the White Man's West: Whiteness and the Creation of the American West.  Also on the site is an interview with Terri Diane Halperin about her The Alien and Sedition Acts of 1798: Testing the Constitution.

In The New Republic is a review of Michael Klarman's The Framers' Coup: The Making of the United States Constitution.

The Los Angeles Review of Books has a review of Pamela Haag's The Gunning of America: Business and the Making of American Gun Culture.  The LARB also carries a review of Lara Feigel's The Bitter Taste of Victory: Life, Love, and Art in the Ruins of the Reich.  Elizabeth Hinton's From the War on Poverty to the War on Crime is also reviewed in the LARB.

Finally, there is also an interview with Elizabeth Hinton over at Public Books.
Posted by Brooke at 3:03 AM