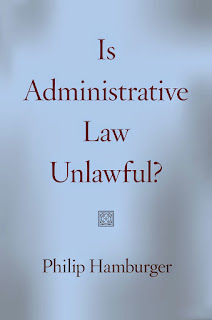 Hamburger responded to my article, and took issue with the argument made therein. This article is a response to Hamburger’s latest offering. The flaws in Hamburger’s argument are even clearer now than hitherto, and there are numerous such mistakes. This article will, however, concentrate on four errors that are central to his thesis.


First, Hamburger’s thesis rests on the argument that administrative law is extralegal, and hence illegitimate and unlawful. It is the central construct from which all else flows. In my earlier article I contended that there were serious difficulties with his conception of the term extralegal. I was wrong. It is untenable. It will be seen that this is so when judged from the perspective of first principle, and from the perspective of positive law. Hamburger’s project is thus built on an intellectual construct that does not withstand scrutiny. It is a pillar of sand.

Secondly, Hamburger’s thesis as to the legitimacy of adjudication and rulemaking by bodies charged with administration in the seventeenth and eighteenth century is wrong. He contends that events such as the demise of Star Chamber and the repeal of the Statute of Proclamations show that administrative adjudication and rulemaking were generally perceived to be extralegal and illegitimate in England at this time. He maintains this fixed view, and is critical of any who differ, repeatedly contending that they have ignored the historical sources. The reality is to the contrary. Hamburger’s fierce insistence that his interpretation of these events is correct is combined with a signal unwillingness to consider whether that interpretation coheres with the evidence. This is a dangerous cocktail, which leads repeatedly to error. His interpretation is not correct. It is irreconcilable in empirical terms with a very great deal of regulatory legislation enacted over two hundred years, in which Parliament continually accorded the administration with powers and duties of a kind that are inconsistent with Hamburger’s thesis. His argument is also incompatible with thousands of cases decided by the courts via judicial review, in which the courts accepted the grant of such authority as lawful, and did not in any way characterize it as extralegal or irregular. Hamburger’s thesis is moreover defective in failing to recognize the clear normative differences between the situations where administrative adjudication and rulemaking were regarded as lawful and those where they were not.

Thirdly, the qualifications that Hamburger makes to his own thesis are conceptually incoherent and do not fit with the empirical evidence. Hamburger seeks to qualify his conclusion that administrative law is extralegal and unlawful. His modality for doing so in the context of rulemaking is through definition of legislative and non-legislative rules; while in the context of adjudication it is done through definition of the term judicial. These qualifications are central to Hamburger’s thesis. The meaning of these terms is, however, conceptually incoherent. It is also inconsistent with much empirical evidence, since as will be seen below the legislature frequently accorded the administration power of a kind that Hamburger believes that it did not and should not have had.

The fourth error in Hamburger’s thesis is methodological. Hamburger takes my earlier argument to task, contending that it was predicated on some brutish Austinian positivism, which ignored constitutional ideals. This is, as will be seen below, nonsense. It is nonetheless fitting that Hamburger should have raised the issue of methodology, since it will be seen that his own argument is premised on a constitutional methodology that is unsustainable both historically and legally. He seeks to defend a far-reaching argument that an entire body of law is unlawful, while ignoring a very considerable body of evidence in terms of legislation and judicial decisions that is inconsistent with his thesis. His argument is, moreover, premised on an indefensible distinction between ‘constitutional ideals’ on the one hand, and legislation and court decisions on the other, which ignores the normative values that are embodied in the latter.