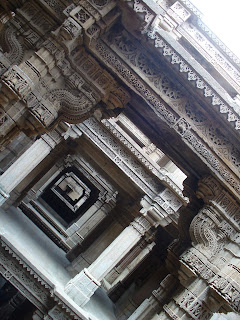 This past weekend saw some legal history action at the 45th Annual Conference on South Asia in Madison, Wisconsin.

The conference has a tradition of one-day preconferences, including the South Asia Legal Studies Preconference. The program this year included a talk by David Gilmartin (North Carolina State), "Custom as a Category: Empire and Water Law in British India." There was also a keynote address by Justice Chelameswar Jasti of the Indian Supreme Court on the selection of judges in India, including a fascinating discussion of India's rejection of the American model for the appointment of Supreme Court judges during the Constituent Assembly debates of 1947-50.

At the main conference, this blogger caught a few talks on the history of international law with a South Asian spin. International lawyer and former UN official Radhika Coomaraswamy gave the Joseph W. Elder Keynote Lecture. Over the past few decades, academics have undermined the value of human rights in conflict zones by construing them as neo-colonial western exports, argued Commaraswamy. SJD student Priyasha Saksena (Harvard Law School) also spoke on the history of international law. She situated legal battles between British India and the princely states within the larger history of international law. And in fact it was the week of global legal history in Madison. Harshan Kumarasingham (Max Planck Institute for European Legal History) gave a lecture at the University of Wisconsin Law School a few days earlier on the role of Sir Ivor Jennings in constitution-writing across the de-colonizing former British Empire. One example of what Kumarasingham calls the "Eastminster" model was Ceylon.

The conference also included a poster session for the first time. One poster dealt with a recent legal development that is being watched closely by medico-legal scholars everywhere. Earlier in 2016, the government of India effectively banned the previously unregulated industry that made India the "surrogacy hub" of the world. Jana Fedtke (American University of Sharjah) explored literary depictions of the transnational industry in its pre-ban heyday. Historians of law and reproduction will soon enough rush in to work on this chapter of Indian legal history.
Posted by Mitra Sharafi at 9:00 AM