History and Constitutional Law in the Law Reviews

Here are a few recently-published law review articles of interest to historians, along with references to related literature.

Argument from the “anticanon,” the set of cases whose central propositions all legitimate decisions must refute, has become a persistent but curious feature of American constitutional law. These cases, Dred Scott v. Sandford, Plessy v. Ferguson, Lochner v. New York, and Korematsu v. United States, are consistently cited in Supreme Court opinions, in constitutional law casebooks, and at confirmation hearings as prime examples of weak constitutional analysis. .... I argue that anticanonical cases achieve their status through historical happenstance, and that subsequent interpretive communities’ use of the anticanon as a rhetorical resource reaffirms that status. That use is enabled by at least three features of anticanonical cases: their incomplete theorization, their amenability to traditional forms of legal argumentation, and their resonance with constitutive ethical propositions that have achieved consensus.


Sanford Levinson (Texas--Law & Political Science) offers a fascinating response to Greene.  In "Is Dred Scott Really the Worst Case of All Time: Why Prigg is Worse Than Dred Scott (But is Likely to Stay out of the 'Anticanon'), Levinson  wonders why Prigg v. Pennsylvania is not a part of the anticanon; its outcome is just as "bad" as Dred Scott, or even worse.  Subjective, externalist factors might explain why Prigg is out and Dred Scott is in the anti-canon, Levinson suggests: the authors of the relevant opinions in the two cases were studies in contrast.  Dred Scott was the handiwork of Roger B. Taney, a Maryland slaveholder apparently not known for the social graces. Taney's negative attributes may have helped to stigmatize Dred Scott.  By contrast, Joseph Story--an opponent of slavery, a professor at Harvard Law School whose likeness now graces the law school's library--was every bit the Northern sophisticate. Story's positive attributes might cause commentators to downplay Prigg's defects.

Social status matters, and it's hard to imagine it not affecting assessments of  the Justices' opinions, just as Levinson contemplates.  I wonder if, in this instance, Story's involvement in the Amistad Case might be significant?  Story wrote the majority opinion in the Amistad Case (1841), where the Supreme Court held that Africans bound into slavery on a Spanish ship had been kidnapped from Africa and illegally traded.  The Supreme Court ordered the Africans freed over the objections of both the Spanish and the U.S. governments.  The outcome in the Amistad case gave momentum to the abolitionist movement.  Given Story's role in this important case, some might find it plausible to draw a distinction between him, a non-slaveholder who upheld slaveholders' rights (in Prigg), and Taney, a slaveholder who upheld slaveholders' rights using strong proslavery rhetoric (in Dred Scott).  Others might reject such moral relativism, particularly since the constitutional issues in Amistad are different than those presented in Prigg and Dred Scott. In any event, Levinson raises an important question about the  anticanon in an interesting way.  For more on the Amistad case, see Howard Jones's Mutiny on the Amistad (Oxford, 1988), among other treatments.

Let's not forget, by the way, that Chief Justice Taney's relationship to slavery has been reconsidered of late, even if his opinion in Dred Scott remains notorious.  Timothy S. Huebner's "Roger B. Taney and the Slavery Issue: Looking Beyond-- and before--Dred Scott," J. Am. Hist. (June, 2010), notes that Taney manumitted his slaves and expressed antislavery sentiment on  occasion. On this account, Taney's decision in Dred Scott did not necessarily reflect his personal views.

Levinson's quick reference to how public displays such as statues can mediate culture and shape institutional memory reminded me of one of his prior works.  In 1998, Levinson published a book-length treatment about the significance of public monuments. It is Written in Stone: Public Monuments in Changing Societies; the work raises issues still relevant to our time.  Here's the publisher's description of the book: 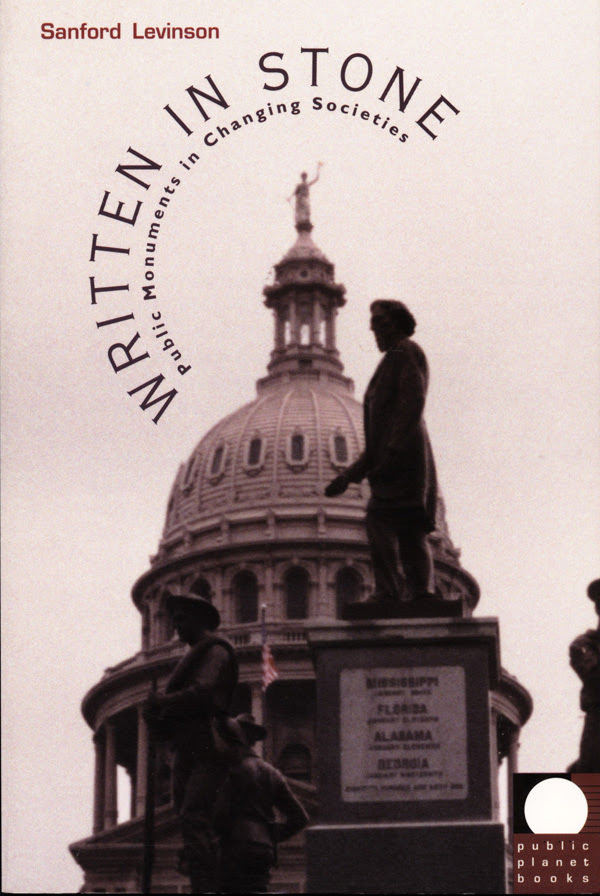 Is it “Stalinist” for a formerly communist country to tear down a statue of Stalin? Should the Confederate flag be allowed to fly over the South Carolina state capitol? Is it possible for America to honor General Custer and the Sioux Nation, Jefferson Davis and Abraham Lincoln? Indeed, can a liberal, multicultural society memorialize anyone at all, or is it committed to a strict neutrality about the quality of the lives led by its citizens?

In Written in Stone, legal scholar Sanford Levinson considers the tangled responses of ever-changing societies to the monuments and commemorations created by past regimes or outmoded cultural and political systems. ... Levinson looks at social and legal arguments regarding the display, construction, modification, and destruction of public monuments. He asks what kinds of claims the past has on the present, particularly if the present is defined in dramatic opposition to its past values. In addition, he addresses the possibilities for responding to the use and abuse of public spaces and explores how a culture might memorialize its historical figures and events in ways that are beneficial to all its members.

State legislatures have passed immigration enforcement laws over the last few years at breakneck speed, and, generally speaking, have attempted to make life as uncomfortable as possible for undocumented immigrants. ... This essay contends that the civil rights implications for immigrants and Latinos raised by the state immigration laws are in many respects similar to the civil rights issues raised by Jim Crow for African-Americans.


The historical analogy is remarkably provocative, but it turns out that  Johnson spends relatively little time developing the point in his essay.

Also see M. Ryan Calo's "The Drone as Privacy Catalyst," which reasons from history only in as much as it calls up on Louis Brandeis' seminal 1890 article, "The Right to Privacy" to make its point. The citation is effective.  Calo (Center for Internet and Society) invokes Brandeis in the course of making this claim:

Associated today with the theatre of war, the widespread domestic use of drones for surveillance seems inevitable. Existing privacy law will not stand in its way.


The good news, according to Calo, is that the advent of drones in the domestic sphere may precipitate legal change.

Posted by Anonymous at 3:00 PM