Ronald W. Meister, a lawyer and chairman of the board of the National Institute of Military Justice, reviews Tomaz Jardim’s The Mauthausen Trial: American Military Justice in Germany (Haravard University Press), in this week’s Washington Independent Review of Books.  Meister’s review commences: 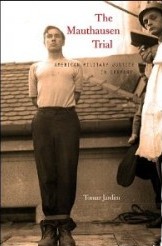 Over the course of two days in May 1947, at a rate of one execution every seven minutes, the United States Army hanged 48 men on the grounds of Landsberg Prison outside Munich. The hangings were the culmination of a swift seven-week trial in which a military court deliberated for a mere hour before finding all 61 defendants guilty of mistreating and killing prisoners at the Mauthausen concentration camp in Austria, and then sentencing 58 of them to death. Although the sentences of several defendants were commuted to life imprisonment, the Mauthausen proceedings were the largest mass execution ever conducted by the United States.