Just out is the self-published James Clark McReynolds, Defender of the Constitution, by a descendant of the justice, Ann McReynolds Bush.  The title page identifies the work as appearing in a first edition as Executive Disorder: The Subversion of the United States Supreme Court, 1914-1940 (2010). 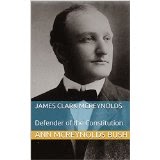 "The book follows the career of US Attorney General and Associate Justice James Clark McReynolds, who advocated states rights, a strict interpretation of the Constitution, and sound currency based on the gold standard. Under Taft, McReynolds was one of the authors of the Judicial Code."

In a prologue, the author explains that she started the book in 1998 "as a biography of one man , Jasmes Clark McReynolds of Kentucky, to challenge the vilification of his reputation, which continues to this day.  Since then, she writes, national events, including “the election of Barack Hussein Obama,” have increasingly “come to mirror the early Roosevelt era.”  McReynolds’s constitutional views, the author argues, “are as valid today as when they were written.”   Hat tip: Brad Snyder.
Posted by Dan Ernst at 9:10 AM