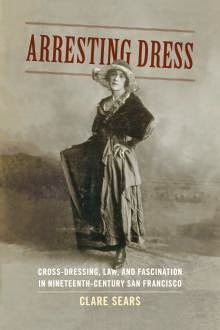 
In 1863, San Francisco’s Board of Supervisors passed a law that criminalized appearing in public in “a dress not belonging to his or her sex.” Adopted as part of a broader anti-indecency campaign, the cross-dressing law became a flexible tool for policing multiple gender transgressions, facilitating over one hundred arrests before the century’s end. Over forty U.S. cities passed similar laws during this time, yet little is known about their emergence, operations, or effects. Grounded in a wealth of archival material, Arresting Dress traces the career of anti-cross-dressing laws from municipal courtrooms and codebooks to newspaper scandals, vaudevillian theater, freak-show performances, and commercial “slumming tours.” It shows that the law did not simply police normative gender but actively produced it by creating new definitions of gender normality and abnormality. It also tells the story of the tenacity of those who defied the law, spoke out when sentenced, and articulated different gender possibilities.