New Release: Hollis-Brusky on the The Federalist Society and the Conservative Counterrevolution

New from Oxford University Press: Ideas with Consequences: The Federalist Society and the Conservative Counterrevolution (Jan. 2015), by Amanda Hollis-Brusky (Pomona College). A description from the Press: 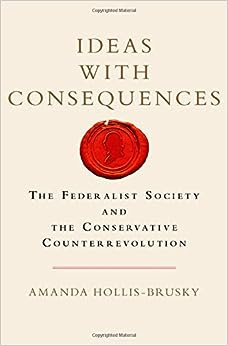 There are few intellectual movements in modern American political history more successful than the Federalist Society. Created in 1982 to counterbalance what its founders considered a liberal legal establishment, the organization gradually evolved into the conservative legal establishment, and membership is all but required for any conservative lawyer who hopes to enter politics or the judiciary. It claims 40,000 members, including four Supreme Court Justices, dozens of federal judges, and every Republican attorney general since its inception. But its power goes even deeper.

In Ideas with Consequences, Amanda Hollis-Brusky provides the first comprehensive account of how the Federalist Society exerts its influence. Drawing from a huge trove of documents, transcripts, and interviews, she explains how the Federalist Society managed to revolutionize the jurisprudence for a wide variety of important legal issues. Many of these issues-including the extent of federal government power, the scope of the right to bear arms, and the parameters of corporate political speech-had long been considered settled. But the Federalist Society was able to upend the existing conventional wisdom, promoting constitutional theories that had previously been dismissed as ludicrously radical. As Hollis-Brusky shows, the Federalist Society provided several of the crucial ingredients needed to accomplish this constitutional revolution. It serves as a credentialing institution for conservative lawyers and judges and legitimizes novel interpretations of the constitution that employ a conservative framework. It also provides a judicial audience of like-minded peers, which prevents the well-documented phenomenon of conservative judges turning moderate after years on the bench. As a consequence, it is able to exercise enormous influence on important cases at every level.

A far-reaching analysis of some of the most controversial political and legal issues of our time, Ideas with Consequences is the essential guide to the Federalist Society at a time when its power has broader implications than ever.


"Ideas have consequences because they develop in social networks of power and influence. In this impressive work, Amanda Hollis-Brusky shows how the Federalist Society network of lawyers, judges, scholars, and activists successfully pushed American constitutional law to the right. This book is an important contribution to the study of constitutional change." --Jack M. Balkin, Knight Professor of Constitutional Law and the First Amendment, Yale Law School